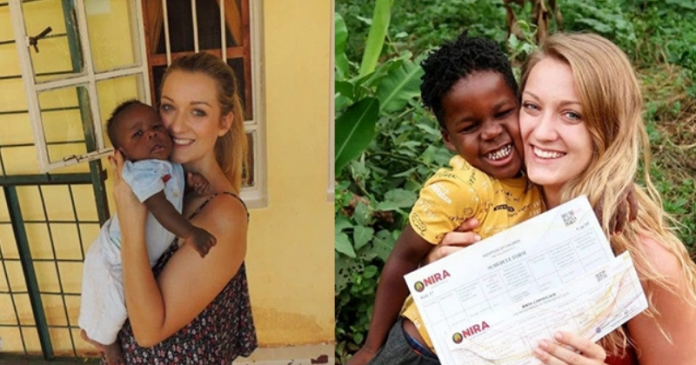 Sometimes people find meaning in their lives in the most unexpected ways, as was the case of a girl who at the age of 23 began a legal battle to adopt a boy from another country. And to this day, 6 years later, that dream has finally come true.

Emily traveled to Uganda to do social work in an orphanage when she was looking for meaning in her life, and she managed to find it.

There she met a small child whose mother has died and there was no one to take care of him. The little boy is named Adam, and he has succeeded in stealing the heart of this English woman.

This girl from Worcestershire, England, never imagined that she would adopt a child. Fact is, adoption was something she never thought of, but the child stole her heart.

“I knew it would be really hard to say goodbye, but I wasn’t thinking about adopting him, I just didn’t see it as a possibility,” Emily said.

The girl met Adam when he was five days old, but in 2015, after her budget ran out, she had to return to England. In her home country, she worked as a teacher for two years during which she saved up money to return to Uganda and adopt little Adam.

Emily finds work in the African country as an international teacher and is able to meet Adam again. The girl rents a house where she lives temporarily with the boy, and during that time, she meets Josh, a 33-year-old security guard who eventually became her partner.

This girl was determined to adopt Adam, and in 2018, she finally got a hearing for child custody, but things are not that simple.

“There’s always something wrong. Sometimes the documents are lost, sometimes the court is overturned, things happen. The adoption process in Uganda took three years, and we were there a total of four-and-a-half years before we came back,” Emily said.

This girl went viral on the network, after which she started a fundraising campaign to cover the costs of the process. Many people were moved by the story and decided to work together.

The adoption process took almost four-and-a-half years until in November 2020, Emily managed to get Adam’s visa and passport to bring him back to the UK.

Due to the pandemic, the matter was delayed again but, now from her country, Emily is taking on another legal struggle to legalize foreign child adoption on British territory.

There were many difficulties and bureaucratic problems that she had to face, but in the boy’s eyes, the woman finds meaning in her life.

For her, there is nothing more important than a mother being next to the baby she gave birth to when she was only a few days old, but for this, she doesn’t mind changing the rhythm of her life completely.

Now, Emily and Adam are in England. However, the young woman faces separation from her partner: Josh, who was left in Uganda. Though, Emily is sure that one day they would be able to be together as a family.

Meanwhile, share this article on Facebook with friends and family, if you love the story about Emily and Adam.