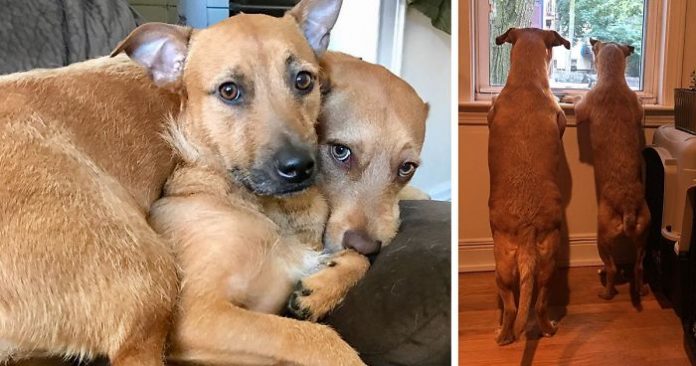 It is very rare for a dog to find its twin from another parent and instantly get along. This proves that animals, similar to humans, need not be related to one another to form a bond. We may never fully understand the strong connection that forms among unrelated individuals, but once it ‘clicks’, it is unwavering and lasts a lifetime.

It was a beautiful day when Bethany Coleman and her dog, Rogue, went for a walk at a nearby Farmer’s Market. On the way, they encountered a dog who looked like Rogue’s twin. The Last Hope K9 Rescue shelter was in the area, with dogs ready for adoption. Bethany and Rogue hurried over to catch a glimpse. 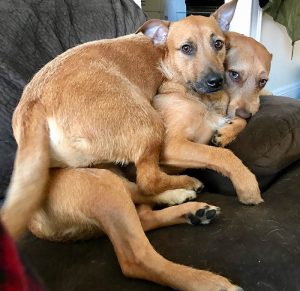 “Rogue and I were out for a nice long walk to our local farmers market when we saw Beast,” Coleman told Bored Panda. “He was there with Last Hope K9 Rescue and a bunch of other dogs that were all up for adoption. What made me want to rescue Beast over the other dogs was that he looked just like Rogue. They’re both cairn terrier mixes. Rogue’s mom was a lab/pit mix, and her dad a cairn, and with Beast, we’re just not sure. It just has a cairn mix in his paperwork, but we think he’s mixed with Basset due to his body type. He looks like a pig and has even been mistaken for a pig a couple of times.”

Bethany lives with her boyfriend, Tyson, in Hawaii. They already have 2 senior cats and a dog. They had no intentions of adopting another dog to their bunch, but seeing another beautiful furbaby during her walk with Rogue enlightened her decision. 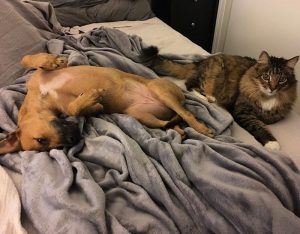 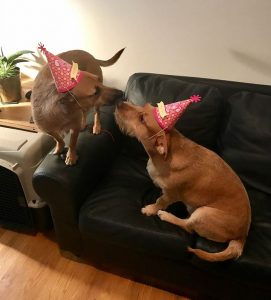 “I just instantly fell in love with him!” she exclaimed. “He was Rogue’s twin! They also got along and immediately started playing with one another. So right then and there, I started filling out the paperwork. I even have the first picture ever of him when he was at the market. Tyson, my boyfriend a.k.a. the dad, really wanted another dog, but I was so against the idea. We already had 2 senior cats that I brought into the relationship and our puppy Rogue. I was not about to add one more animal to the mix. Who in the right mind would ever let us rent an apartment from them.” 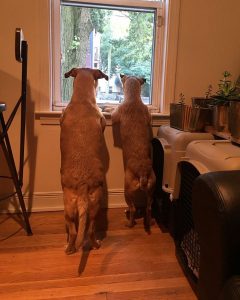 Rogue was begging Bethany to adopt the 8-month-old puppy. Finally, she was convinced and arranged the adoption papers. The couple welcomed the new puppy into their home, and named him Beast. The new puppy instantly felt ‘at home’ and never left Rogue’s side. They have become the best of friends since then.

“Beast is the big baby and my cuddle bug who competes with the cats for lap space,” Coleman said. “It took about a month for everyone, including the cats, to find their groove. To be fair, we got them the same exact toys thinking that would solve everything. Nope! Rogue always and actually to this day wants whatever Beast has. It’s funny to watch when we give them treats. Halfway through whatever it is they’ll switch and go for each other’s toy. But at heart, they’re best friends!” 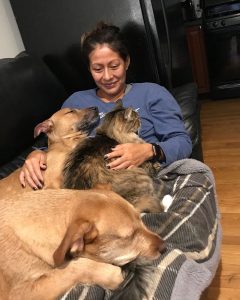 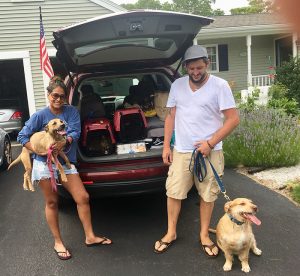 The ‘twin’ dogs and their human parents love to go to the beach for some fun under the sun. Beast loves to play in the water and on the sand, while Rogue loved to annoy the crabs. Together they love to swim and run along the shoreline. With these 2 besties, life is all about having fun. “We’re gonna also get her a life jacket but teach her how to surf on a boogie board.” Bethany proudly said.

Here are some heartwarming comments netizens have posted about the photos of the 2 besties:

A Dog Enters a Cage to Warn a Mother Tiger who...