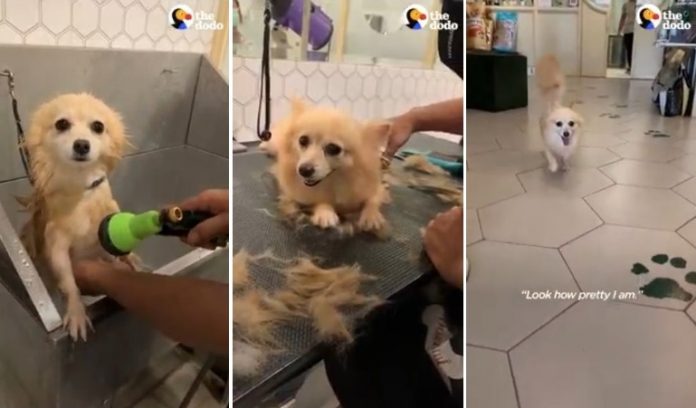 A rescuer named Sabine in Bali, Indonesia, saved a dog who was locked in a cage with a tarp for almost 2 years. She described the small dog as scared and defensive since she could be heard growling when the rescuers arrived. The rescuer asked the owner if the poor dog has been in the cage for quite some time. 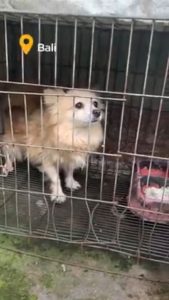 “Two years,” the owner replied. “We had a baby 2 years ago, and we are worried that our baby could get sick from the dog.”

The rescuers kept coming back to see the welfare of the dog. After a month, the owner finally agreed to hand over the caged dog to the rescuers. “All right, I will give her in your care.” the owner said to Sabine, and she replied, “We promise. We’ll find her a good home. We’ll look after her. She needs a vet.” 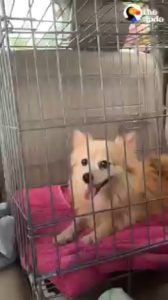 Sabine and the other rescuers did not spare a minute and transferred the female dog to another cage with a top opening and a pink towel. They were pleased that the dog immediately obeyed and showed that she was happy being rescued. Though they noticed that the poor pup needed treatment for being caged too long. She was teary-eyed, her fur was matted, she had an ear infection, and she was infected with ticks and fleas. She stayed quiet and obedient throughout the ride to the veterinarian.

The vets were careful in handling the scared dog during her treatment. Assuring the dog, the vet tried to earn her trust. “Hi there, girlie,” said the vet. “Is it okay if I touch you?” They cut her long nails, did some skin treatment, and cut off the excess matted hair. 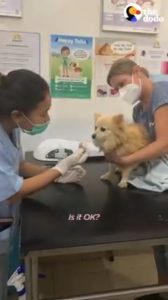 In the shelter, the dog was given the name Mimi. She was happy and proud that she was rescued. She loved to run around outdoors and play on the grass. Mimi was certainly free to become herself in the shelter. Sabine loved to play with Mimi most of the time. 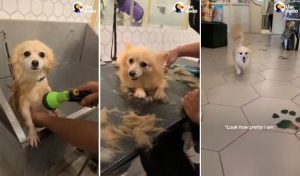 SPA Day! After a few days, Mimi was brought to a dog spa treatment center, where she was given a bath and a haircut. Her stares at Sabine were evident that she was more relaxed and enjoying the treatment. Mimi was happy with the results, and Sabine was impressed. Running to Sabine, the dog’s smile indicated a message to Sabine which said, ‘Look how pretty I am.’ Sabine laughed when Mimi approached her.

A few more days have passed, and Sabine searched for someone who would adopt Mimi, a perfect match who would treat her like a princess, preferably someone who lives in a safe place so Mimi could not run away. Also, Sabine was searching for someone who will no longer put Mimi in a cage.

She found the perfect person to adopt Mimi, and her name was Suzanne. Mimi was also happy and excited when she met her new human mother, who gave her the perfect place to live, a haven with a large backyard for Mimi to play in. Suzanne loves Mimi so much, and the beautiful dog has found her ‘forever’ home. Now, Mimi is definitely living her life like a Princess. It’s wonderful!

You may watch the video of Mimi here: (click on the link below the photo)