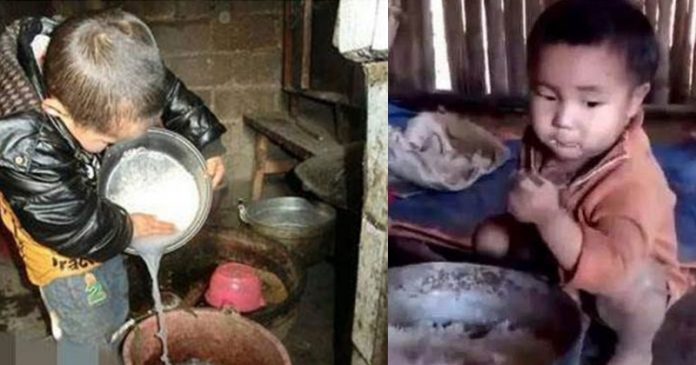 This is a story about a boy who is only 5-years-old but has been encountering unfortunate events. His father left, and not long after, so did his mother. The boy stayed alone at home for more than ten days. How could this have happened to a poor little boy?

When he is hungry, he would imitate his mother when he cooks by putting rice in a pot and putting water on it until it boils. However, due to his inexperience, the rice was always only half-cooked.

The hungry little boy ignored the uncooked rice and ate it even though it was still hot. He would take a spoonful of rice then put it in his mouth after blowing it until it cools.

Upon investigation, it turned out that the mother had lied to the child. He usually follows wherever his mother goes. One day his mother told him that she would be looking for money out of town to buy him toys and would be right back. The boy believed, and this time he did not go with his mother.

Unexpectedly, after two days, his mother did not return. She had been away for more than ten days, and the little boy often cried loudly, looking for her in the middle of the night.

Neighbors who took pity on the little boy wanted to send him to his relatives. Some people are willing to adopt the child. However, the little boy always refused, saying that his mother would be sad if he didn’t find him home, so he had to wait for his mother to come back.

Hearing this from the little boy, all the neighbors couldn’t hold back their tears!

When he is hungry, he will cook his own rice. He would also wash the dishes after eating just like his mother did.

His life like this lasted for half a month, and the rice supply was also almost gone. The neighbors often assisted but the boy is still waiting for his mother and refused to leave the house.

“Mom went to get money to buy toys,” he said.

The locals were really very depressed but couldn’t do much.

What a very sad story!

Father wears skimpy shorts to show teenage daughter why it is...