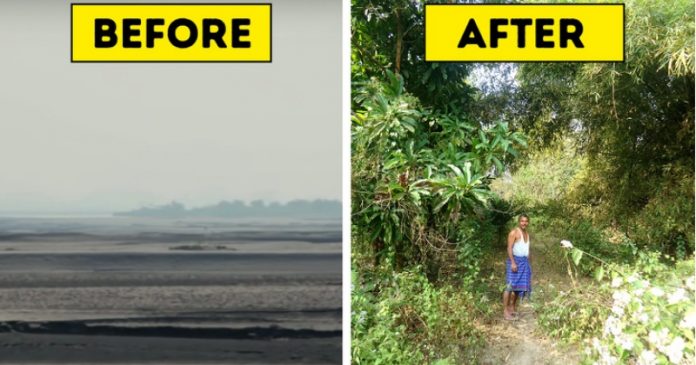 The world’s largest river island in Northern India, Majuli has always been very dry and sandy before a milk seller decided that he wanted to change the landscape and his environment by planting a whole forest all by himself.

At the age of 16, the man named Jadav Payeng witnessed a lot of dead snakes spread along the edges of Majuli Island, an island on the Brahmaputra River as they died from the heat and lack of shade.

The land was dry and barren.

After witnessing that miserable devastation with his own eyes, Jadav made a resolution to revive the sandy, barren island. He was determined to plant a tree every single day and turn the place into an incredibly lush forest.

One plant at a time, Jadav never gives up on his forest.

Started as a promise and a dream in 1979, the land turned into Mulay Forest 40 years later. Bigger than Central Park with more than 12 times the size of Vatican City, Mulay Forest existed thanks to Jadav’s endless effort in reviving the place.

From desert to forest, his effort is beyond amazing.

The forest has now helped to preserve the local ecosystem and native wildlife. It is now home to a lot of wild animals such as Bengal tigers, deers, rhinos, vultures, elephants and snakes. Besides that, the afforestation quest has also protected Majuli from erosion as the trees anchoring the island to the mainland.

The difference is out of this world.

Jadav’s big gift to nature would still be a secret to all of us if it wasn’t for an Indian photojournalist Jitu Kalita who discovered the unknown forest while on a trip to photographs birds in 2007. Jitu documented Jadav’s achievement in a documentary called Forest Man.

Jadav’s effort was even noticed by the former president of India where he was given the title ‘Forest Man of India’.

His effort to revive the environment is one of a kind!