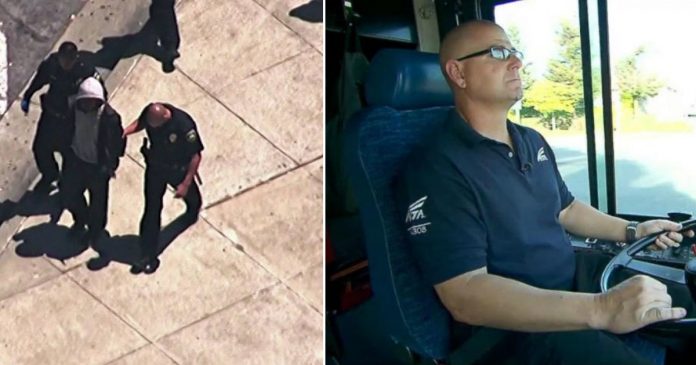 When the news of a three year old boy abducted from Milpitas Public Library in California spread like wildfire all over the area, locals were asked by the police to be vigilant.

Descriptions of the boy and his abductor, suspected to be a homeless man, was flashed all over the television and radio stations. The Valley Transportation Authority (VTA) drivers were also informed to take note of the details and keep their eyes peeled for any passengers that seem suspicious.

That was when Tim Watson, a VTA bus driver spotted an unlikely pair of man and a boy commuting in his bus.

Though he wasn’t directly facing them, he could somewhat gauge that the little boy sitting next to the man looked eerily similar to the missing boy in the news.

Watson quickly devised a plan. He notified his passengers that someone had lost their belonging in the bus and he had to stop for a quick search. He took this time to get closer to boy, and his instincts were right, the boy indeed matched the description; plaid shorts, and red shoes.

“The boy was crying. I saw his teary eye. I started asking passengers about a missing green backpack. What I’m trying to do is get to the perpetrator,” he told ABC News.

Watson then got off the bus to make a discreet call to the police, making sure the man doesn’t suspect anything and run away with the boy. The police instructed him to stick to his route and stop at the Fremont BART station, where the police were waiting.

“I open my door slowly, giving them time to get ready and be ready to act ,“ explained Watson to Daily Mail when asked about his call of action as soon as he arrived at the stop.

Just then, the suspect got down and casually started walking away with the boy. He only barely managed to fleet before the police apprehended him, carefully retrieving the child away from him.

Less than an hour after a 3-year-old boy disappeared from a library in Santa Clara County, public transit bus driver Tim…

The suspect, identified as Alfonso Edington was detained though the reason behind his actions were unclear, as he had no connections to the boy or his family.

The boy was taken to the Milpitas police headquarters, where he was reunited with his parents. It was an overwhelming scene for Watson as well everyone who was present.

When asked of Watson’s quick thinking, the father of two said, ” I became very emotional. This could have been my child that was abducted.”

Watson received a standing ovation and a confetti of praises for his brave effort.

“Tim is an integral part of this team effort. He has used the tools he has been given in driver training, while maintaining his innate self-control and insight,” prided Watson’s boss Nuria Fernandez.

Watson remained humble amidst all the verbal accolades. “I feel like I did what any father would do,” he gestured.