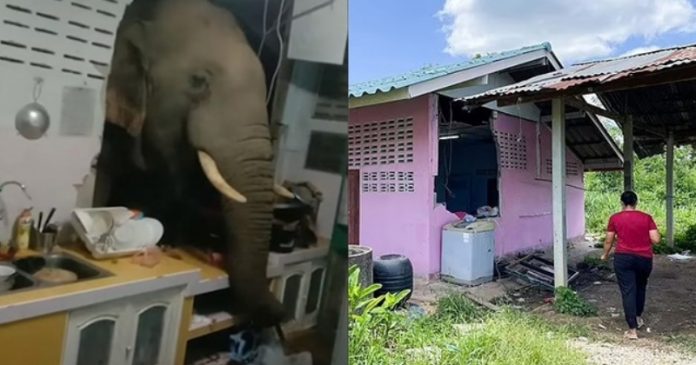 People would keep their homes and belongings safe before retiring for the night. That’s why doors and windows are usually locked to prevent intruders from entering in the middle of the night, and everyone is asleep. However, a family in Thailand can do absolutely nothing to withstand the power of a creature far smarter and greater than the usual thief.

Some time ago, an elephant knocked down a property wall to steal something from the kitchen. The large animal made family members not only extremely frightened, but its actions had also damaged the structure of the house.

At around 2:00 AM on Sunday, June 27th, an adult elephant named Plai broke into a resident’s house in Hua Hin, southern Thailand, tearing down the wall of their kitchen. As reported by local media, the creature knocked down the wall for an ordinary reason: a delicious packet of rice.

Startled by the rumbling sound in the middle of the night, Rachadawan Phungprasopporn ran with her husband into the kitchen and was shocked by what they found.

Rachadawan was surprised to see a hole in the kitchen wall and an elephant’s head protruding inside, while his curious trunk took all the food in the kitchen.

There was one thing that caught the animal’s attention, it opened a rice packet and ate it, much to the surprise of the couple.

“This elephant is well known in the area for causing a lot of damage. He once came to our house about two months ago and had a look, but he didn’t break anything back then,” said Rachadawan.

After this unusual experience, the pair learned a thing or two about this curious creature and its capabilities. Additionally, they had to repair their kitchen wall, which had major damage.

“We spoke to local wildlife officials, and they told us not to leave food in the kitchen because the smell attracts elephants, so we followed their advice. Repair of the wall will cost around US $1,515.00 (50,000 Thai baht),” the woman said.

Surely, the authorities would take action on this matter, and they are trying to catch this naughty elephant. We just hope they treat him with respect and can transfer him to a shelter where he lives a happy life without hurting anyone, and will never go hungry again.

Here is a video of the incident:

Hunters often corner these creatures, and they end up getting lost in community settlements. Share this news and tell your friends about animal wildlife awareness around the world.