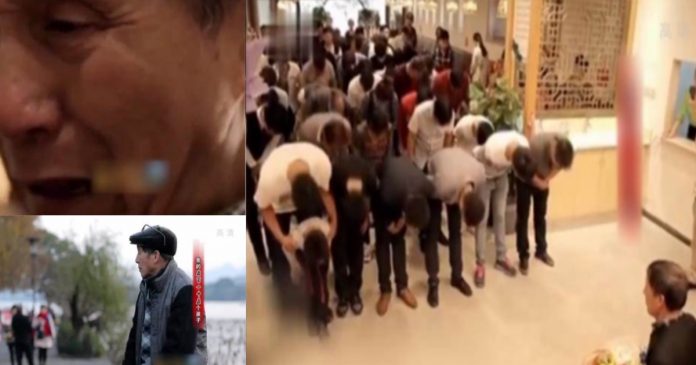 As the saying goes: “Raising a child is greater than the sky.” This also shows that it is not easy for parents to raise a child. However, what was inconceivable was made possible by an old man who helped raise 515 homeless children with his meager strength.

A vegetarian restaurant in Hangzhou, China is having a special birthday party. More than 100 people across the mainland came to celebrate the 70-year-old man’s birthday. The elderly man is Wang Wanlin, an ordinary citizen of Hangzhou.

Whenever he encountered children in need, Wang Wanlin always rushed to help as soon as possible. Since 1976, he has saved more than 500 children. He had a bag with pictures of him and the children.

There are more than 500 photos, and he can accurately pronounce each child’s name in almost every photo. Today, more than 500 children he rescued live across the country, and some even live abroad. Now, Wang Wanlin’s routine was to go to the son’s salon to visit them.

The first thing Wang Wanlin did when he got off the station was to buy bananas, because one of his sons likes to eat bananas. After Wang Wanlin bought two big bags, he would help his son open the salon.

One of his sons also likes to buy him things like hats and scarves. Even though Wang Wanlin always told them that it was just a waste of money to buy such things, in his heart he was very happy that his children were so thoughtful. There are so many of his children who care and buy shoes, pants, and clothes for him.

Each working child gave some of their earnings to Wang Wanlin, and he saved the money to help other children. The barbershop owner was also one of the children that Wang Wanlin helped. The owner is Chen Xiguang, now 26-years-old.

10 years ago, he was 16-years-old and came to Hangzhou to work alone. However, for a 16-year-old, it is not easy on his own. When he was at the lowest point in his life, Wang Wanlin came to help him.

When Chen Xiguang said he wanted to eat something, instantly, the food will appear on the dining table the next day. He had lived in Wang Wanlin’s house for 10 years.

Although he also had a biological father, Chen Xiguang had long considered Wang Wanlin as his adoptive father. In Chen Xiguang’s eyes, Wang Wanlin was not only a father but also a leader in his life.

As long as Wang Wanlin was in his life, he would always try to repay his kindness.

Wang Wanlin lives in an old house of about 50 square meters and this house is already inhabited by hundreds of children.

When Wang Wanlin bought vegetables and went home, the children had already woken up one after another, but it was one of the children named Ah Hua who was still lying on the bed. The noisiest time in this simple house is when “father-and-son” are fighting.

Who would have thought that 9 years ago, Ah Hua was a child who had no money in his pocket and lived under a bridge? However, thanks to Wang Wanlin, he had a warm home and a father he could rely on to talk to.

The first child that Wang Wanlin saved was a child who ran away as a child laborer. Seeing this poor child that night, Wang Wanlin couldn’t stand it and took him home. However, his mother did not scold Wang Wanlin but instead felt that it was something good.

One day, his neighbor’s watch disappeared. He insisted that Wang Wanlin stole the watch. For this reason, he was arrested by the police and detained for 28 days. Wang Wanlin’s reputation was instantly destroyed.

Life shouldn’t get to that point. This was where Wang Wanlin’s idea of adopting a child has strengthened. Wang Wanlin is a new worker with a limited source of income, but no matter how difficult his life is, he also wants to provide the homeless children with a warm home.

One day, Wang Wanlin found the missing child from Anhui and wanted to take her home. Since the Spring Festival was taking place, tickets could only be purchased on the third day, and because of that, he let the child stay at home for three days. Wang Wanlin bought two tickets and took the child with him. However, just as he was walking to the train station, a policeman came forward and asked Wang Wanlin.

Gradually, many people questioned his good deeds and suspected that he had malicious intentions, Wang Wanlin, who had never faced such a situation panicked instantly.

The police contacted the child’s mother. When the mother saw the child, she immediately cried because Wang Wanlin had found her daughter. Wang Wanlin who saw her cry wiped his own tears silently. It turned out that the mother could not find her child and reported that the child had been kidnapped. The mother didn’t say anything to Wang Wanlin and looked suspicious.

Mother and daughter did not try to defend him when he was accused of being a child abductor, and this made Wang Wanlin feel disappointed at first. He was depressed and couldn’t sleep all night.

But the next day, the mother who knew the truth came to Wang Wanlin’s house to apologize, if he had not brought the child with him, she might not have been found.

Apart from having this misunderstanding cleared up, it turned out that Wang Wanlin was also tricked by her child. She called to borrow money and said her sister got married.

Since the money was meant to be used to help some children, this matter really broke Wang Wanlin’s heart, but he still didn’t give up. There are still many children who cannot find a home.

With Wang Wanlin’s help, some of his adopted children were accepted into universities, and some had businesses.

Several children had lived with Wang Wanlin for more than 10 years, and spent a long time with him.

After they had their own lives, they would always write to Wang Wanlin and address him as a father. This is what motivated him to continue adopting children into his life.

In 36 years, many of the children who used to be on the streets have been accepted into universities, and some have founded companies. He has rescued nearly 515 street teenagers across the country.

“I spend most of my income on these children. I am not married but have many children. Even though I lived in poverty all my life, I lived the happiest life in the world,” said Wang Wanlin.

When Wang Wanlin was 70-years-old, his children threw a birthday party for him. He also received birthday blessings from his adopted children from all over the world. 106 children came and celebrated his birthday.

Over a hundred people bowed to Wang Wanlin in appreciation. His life was a legendary one. Here, many people wish him good health and happy life in his old age.

The bride’s mother sensed something unusual about the groom after a...

A Former McDonald’s Employee, who Lived in a Housing Commission Flat...