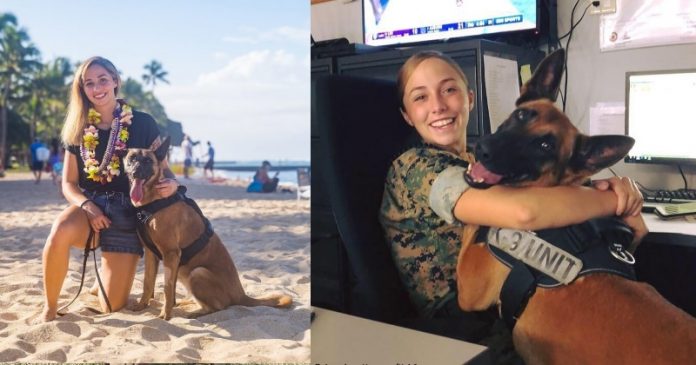 US Marine Corps Sergeant Angela Cardone and her military dog ​​Bogi have been inseparable after two years of joint training, even after starting 15-month cooperation.

When Cardone was transferred from Japan to Hawaii, she had no chance to say goodbye to Bogi.

After two years of thinking, waiting and a lot of paperwork, Cardone reunited with her former partner.

Now, 5-year-old Bogi has retired, allowing the former trainer to adopt the dog and let it spend the rest of her life happy.

Bogi, the Belgian Malinois, suffered a break in her neck during service which forced her into early retirement as she is now unable to even wear a collar.

“It feels great, it’s like a huge heavy object unloaded from my chest.” In an interview with People magazine, 22-year-old Cardone said that she had been dreaming of reuniting with Bogi since the day they separated.

She and Bogie met for the first time at the Marine Corps Air Station in Iwakuni, Japan in 2017. Before officially becoming a partner, Cardone trained the dog in drug detection, security inspections, and vehicle searches.

At first, she was not so keen on working with Bogi. According to the “Daily Mail” report, Cardone explained: “It doesn’t know many orders or even its own name.”

“But after working together for a month, I found that our personalities are exactly the same: super clumsy, silly, and we work really well together.”

Angela Cardone, 22, a US Marine Corps Sergeant, was paired with five-year-old hound Bogi during their service in Iwakuni, Japan, from July 2018 to October 2019, having already trained together for two years.

After being transferred to Hawaii, the sergeant worried that she would never see Bogie again.

Months passed. In June 2020, Bogie suffered a serious neck injury, which made her eligible for medical retirement. Cardone immediately reached out to her former partner and gave her a permanent home.

She contacted American Humane’s military program and asked for help transporting Bogi overseas. This non-profit organization guided Cardone through the adoption process, helped with paperwork, funded Bogi’s trans-Pacific trip from Japan to Hawaii, and provided her with future veterinary care.

During their 18-month separation Angela was devastated and couldn’t stop thinking about Bogi.

Angela and Bogi being reunited in February.

A representative from a humanitarian organization in the United States said that it was an “honor” and “excitement” to be able to reunite the sergeant with her best friend and to give Bogita the happy retirement life she deserved.

“Sergeant Cardone and Bogi made many sacrifices for our country.” Dr. Robin Ganzert, President of the United States Humanitarian Organization, said in a statement: “At least we can reunite them. The reward is given.”

On February 16, Bogi and Cardone reunited at the Queen Kapiolani Hotel in Honolulu, the retired puppy wagging her tail upon seeing her former handler. After giving the puppy hugs, toys and wreaths, Cardone took pictures with her on the beach, and then returned to Cardone’s home.

The organization has a military program dedicated to reuniting K-9 veterans and former handlers and giving them the best retirement, with ongoing vet care and financial support.

Bogi made her journey across the Pacific, with a stop over to rest with a registered handler, thanks to the funding and coordination efforts of American Humane, who will also cover her vet costs for the rest of her life.

“The first few minutes of seeing Bogie…it’s indescribable,” Cardone said. “I never thought that this day would come, so it’s really a warm feeling.”

Cardone is looking forward to introducing Hawaii’s beaches and trails to Bogi, as well as giving her a lot of delicious food, staying on the sofa together, and enjoying Starbucks’ “Puppuccino.”

“I have been looking forward to this day,” she told the “Honolulu Star Advertiser,” “She’s the sweetest dog you’ll ever meet.”