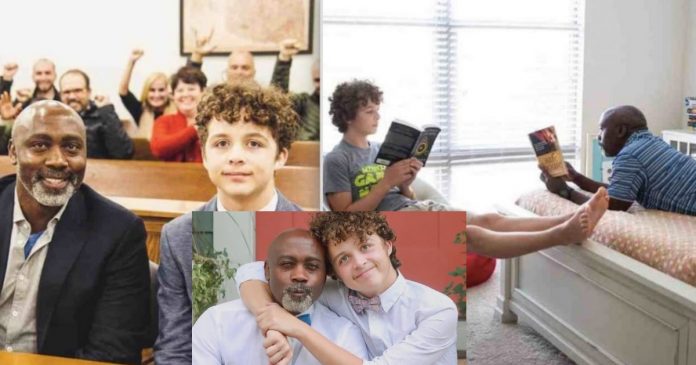 An African-American single man recalls being abused by his family when he was still a child. He ran away from home and was adopted by a kind-hearted guardian. As an unmarried adult, Peter Mutabazi managed to acquire parental rights and adopted an 11-year-old boy who was abandoned by his adoptive parents in a hospital.

At the age of 2, Tony was adopted into a foster family in Oklahoma, USA. Growing up, he never knew his biological parents. When he was 11 years old, his adoptive parents left him in a hospital and never returned. An employee from the hospital named Jessica Ward knew Peter Mutabazi, a single man who fosters struggling children.

He took in Tony and planned to help him only for 2 days. However, when Peter learned about Tony’s family background, his heart sank for him. Peter had the conditions and resources to become a parent, and he immediately decided to adopt Tony. He has successfully become the boy’s legal parent, and they now live in South Carolina.

“I had the room, the resources, so I had no reason to let him go,” Mutabazi said.

Peter grew up in Uganda, Africa. At age 10, he ran away from home because of his abusive parents and was fortunate to be adopted by a kind-hearted guardian. As the years passed, he learned how to be kind to strangers. When he arrived in the USA, he started working for a charity that helps struggling children. He recalls the day he met Tony and said that he was the cutest and smartest kid he has ever seen.

“For what someone did for me, I wanted to do something for someone else,” Peter said.

Proud adoptive father says that Tony is doing well in school and plans to go to college to help the less-fortunate people.