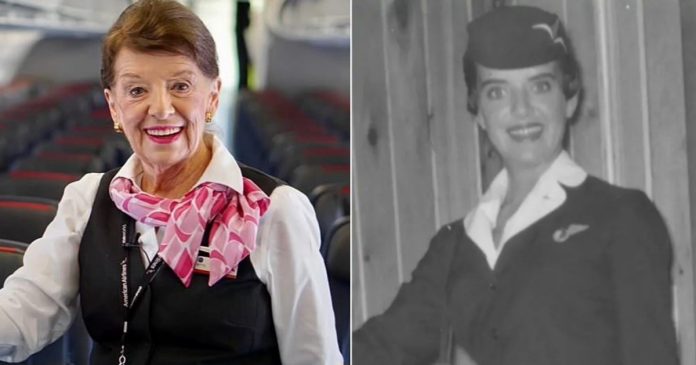 The oldest flight stewardess has made it to the Guinness Book of World Records due to her long career as a cabin crew since she was a teenager. Now in her late 80s, she admits that she is not about to retire from her job just yet. The flight attendant is strong and healthy and is still enjoying her job for the last 6 decades.

86-year-old flight attendant Bette Nash, from Manassas, Virginia, has been working in the aviation industry for the past 65 years. Bette has witnessed the transition of its technology throughout the years. From blackboard timetables and handwritten tickets to the current computerized reservations, she has equipped herself with knowledge of the ever-changing technology in aviation. Bette admits that she still enjoys her job and has no plans of retiring soon.

▼ Bette took her first flight as a stewardess when she was a teenager in 1957. She provided safety instructions to the passengers before take-off and pushed beverage carts to provide the passengers with their food and refreshments during mid-flight. Young Bette immediately fell in love with her job and the “smart looks and gracious manners of the crew members,” she told AirlineStaffRates.com.

During her first months on the job, she reveals that tickets were cheap then, selling at $12 per passenger. Flight schedules were still written on a blackboard, and tickets were handwritten.

“Gone are the days of handwritten tickets, seat assignment stickers, and chalkboards,” Bette said. Below are photos of a 1955 flight ticket and a 1938 flight plan written on a blackboard.

▼ Through the years, the aviation industry rose to a higher level. Bette witnessed handwritten tickets, seat-assignment stickers, and flight chalkboards become obsolete and upgraded to computerized reservations and ticketing. In her 65-year career, she has also observed that the clothing style changed dramatically. When the industry evolved, Bette says that the needs and concerns of the passengers never changed.

“The clothing when I started was very conservative. Then we started to really come out. Things calmed down a bit after that. Maybe their clothes are changing, but people have the same needs — a little bit of love and attention,” she told the Catholic Herald in 2017.

▼ Bette was working for American Airlines after it has bequeathed Eastern Airlines. Her colleagues say that she is warm and caring, smiles at every passenger, and made them feel welcome. Bette was always neat and very presentable. Passengers were impressed by her ability to remember a passenger’s name and a conversation she had with them.

A passenger named Simon Johnson told DailyMail.com in 2017: “I think the most amazing and impressive thing about Bette is the way she warms up the entire plane. You move on. You meet her. She knows your name. She remembers that conversation she had with you yesterday or last week or a month ago.”

“I fly hundreds of thousands of miles a year, but those are always my best flights when Bette is on the plane,” another recently gushed to ABC.

“Bette has served millions of our clients around the world for the past six decades,” said Doug Parker, American’s chairman, and CEO, in 2017. “It’s the simple things she does every day, like greeting customers with a warm smile, a friendly hello, and a thank you for her business, that have contributed to her legacy and her ability to create an airline with which customers want to fly.”

“I love my people. I love being on the same flight because I know my customers,” Bette explained to CNN. “It was just the perfect career path. It’s given my love for people an outlet, and I like to think I’ve served others well.”

▼ Bette’s job takes her to various flight routes, but she prefers the New York-Boston-Washington, D.C. route since it allows her to be home in time to say good night to her disabled son.

Bette is 86 years old this year, but she does not see herself retiring from her job anytime soon. She loves to connect with people and enjoys listening to their stories and concerns with great enthusiasm.

“I really enjoy my three-minute conversations on board. And I’m often amazed at the interesting work, the travel, and the lives of the people. As long as I’m healthy and able, why not work. It’s still fun.” She added to CNN, “Even if I think I might retire, I come into work, and I’m like, ‘I can’t do this.’”