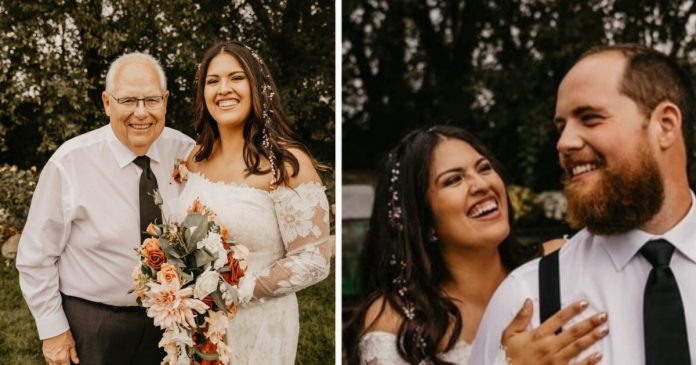 When a wedding date has been set, it is not proper for it to be rescheduled. Participants of the said event and the guests have looked forward to the celebration and preparations are usually not easy. Tardiness on a special day is inexcusable, but what if one of the major participants is unable to attend due to unavoidable circumstances?

The wedding date has been set. The groom, Jacob Akerson, and his bride, Maria, both from South Dakota, have prepared for their special day, though unexpectedly, the best man has canceled at the last moment.

Andrew, the groom’s best friend from California, lost his job due to the COVID-19 pandemic. Since he found a new job, he could not take a leave from his work, hence he informed the groom about the situation.

“Whether it is to keep his job or go to the wedding, he can only choose one, so he can’t come to the wedding, and I don’t blame him,” 26-year-old Jacob told The Epoch Times.

Only a few more days before the big event, Jacob came up with the best solution. There was just one particular person he could think of to stand in as a groomsman. 74-year-old Al… Harvey “Al” Akerson, his grandfather.

The perfect choice! When Jacob was younger, he and his mother moved to his grandparents’ house because of his violent father, who suddenly left his mother. Since that fateful day, Al raised Jacob like his own son in his home.

Growing up, Jacob never knew that Al was not his real father. It was when he became an adult that he was told the truth.

“My grandfather used to take me fishing with him when he was young,” Jacob said. “He taught me how to clean a shotgun and how to hunt. He was the closest ‘Dad’ I’ve ever had.”

Jacob did not hesitate to assign Al as his stand-in groomsman. Though Jacob had younger brothers, they were chosen to be the ring bearers since they were aged 10 and 8.

Al, a retired oral surgeon who presently runs a hardware store, immediately accepted the role Jacob handed to him.

On September 30, 2021, the outdoor wedding was a complete success! Although summer in South Dakota was scorching hot, there were heavy rains that day. When it was Grandpa Al’s turn to walk down the aisle, he jokingly did a graceful dance that brought happiness to the event. During the photo sessions, among youngsters, he looked really lovely in all the pictures.

“He also gave a heartfelt best man speech, which was short and sweet,” Jacob added. “He said he was proud of the kind person I was today and that it was a pleasure to watch me grow along the way.”

“It means everything to me. I’m so moved by his behavior. Especially when he’s willing to take on best man responsibilities when we needed it most, rather than just being a default ‘father’ in the scenes. Throughout my life, he has always had some kind of responsibility,” Jacob added.

Being married for 52 years, Al shared the secret to a long-lasting and happy marriage. “You have to be picked by the right woman,” Al told the local media. “I believe Jacob did it.”

Congratulations to the newlyweds, Jacob and Maria!

This old man was terribly frustrated to only catch old oysters...