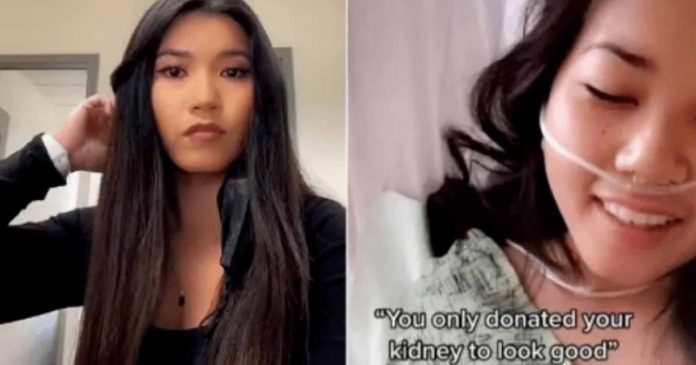 Recently, a 30-year-old woman who had a relationship with her boyfriend for 6 years was told by him that he needed a kidney transplant. 7 months after the surgery, he cheated on her. The woman’s story caught the attention of netizens.

Without hesitation, the woman took the compatibility test since she was in love with her boyfriend of 6 years. The results show that the woman’s kidney matched her boyfriend’s, so she decided to donate one of her kidneys to save his life.

7 months after the transplant, her boyfriend cheated, and he was caught. The woman, still very much in love with her boyfriend, chose to forgive him and asked for reconciliation. She was rejected. The shameless boyfriend said: “You chose to donate your kidney to me just to make you look kind and generous.”

When his life was on the line due to trouble with his kidney, his girlfriend did not hesitate to donate one of her kidneys to save his life. The boyfriend’s life would have been greatly affected if it were not for her. It just shows how sincere she was and how ungrateful the boyfriend was after what she has done for him. The selfish man even dared to cheat on her! Netizens who learned of the incident had various reactions.

“In this world, other than family, I would not sacrifice any part of my body to help an ungrateful person. These are the rules I set for myself since I was very young.”

“A person’s kidneys have important functions in our system. This girl’s immunity is greatly reduced without 1 kidney, and she will suffer greatly in the future.”

“If you give your kidney to someone else, then it may affect your family. If a person loses a kidney, he will be a sick child for the rest of his life. Love yourself.”

People always remind others not to ‘give in’ immediately when someone makes a request, especially someone not related to you. It is easy to grant a request to someone you are in love with, but always be wary if the relationship is worth more than the request. After all, breakups are redundant. Think twice before you move once. Do not sacrifice yourself to someone you feel is not worth your love. #LoveYourself

Little girl creates puddles inside her mother’s car and slathers the...