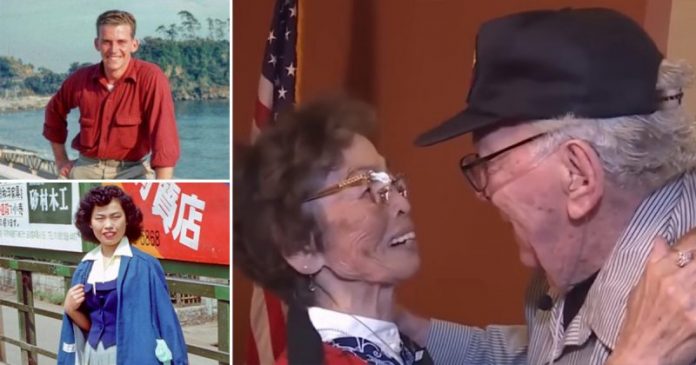 “First love never dies.” This is a quote that almost everyone believes since time immemorial. Maybe so, since the first time we fall in love holds the best memories. A Korean war veteran is a perfect example of a person with undying love, reuniting with his first love after 70 years. “We once planned to get married.”

91-year-old war veteran reunited with his first love from Japan, and he always wanted to tell her, “I never abandoned you at all.”

It was the Fall of 1950 when a 19-year-old Duane Mann and his classmates decided to join the United States Navy. After undergoing 14 weeks of training at the Great Lakes Naval Training Center in North Chicago, Illinois, young Duane was assigned to the Navy Air Station in Alameda, California, from January 1, 1951, to December 23, 1952. He was later transferred to the Far East Pacific Fleet in Yokosuka, Japan.

For the first nine months of 1953, Duane remained at Yokosuka Naval Base working as a Class 3 Aviation Storekeeper. Come October 1953, he requested to be transferred to Haneda Air Base (Tokyo International Airport), which was also home to the 1503rd Air Transport Squadron of the United States Air Force.

At the age of 23, Duane was promoted to Class 2 and became eligible to become a member of the Unaccredited Officers Club. Club Manager and Technical Sergeant Dickens noticed Duane was good at handling mechanical devices, hence, offered him a job that paid $90 a month including meals. While in the club, he worked as a slot machine mechanic. This is where Duane Mann meets Peggy Yamaguchi.

Peggy Yamaguchi works at the NCO Club as a ‘Hat Check Girl’ and ‘Greeter’. She is friendly and sociable, speaks English very well, and loves to travel with military families. Peggy and Duane instantly became friends, spending hours listening to a band while enjoying conversations over drinks. Duane was amazed when they danced. “Oh! She is very good at dancing!” Since then, their friendship grew into something deeper.

Soon, Duane and Peggy’s friendship cultivated into a relationship until they realized that they have fallen in love with each other. Duane enjoyed watching Peggy play the piano and sing. He no longer goes to Chow Hall for breakfast, except while on duty, so that he and Peggy can spend more time together.

In June 1954, the couple was having a serious talk about marriage. They were aware of its complications when a Japanese girl married an American soldier since their stay is just temporary. Duane’s 4-year term of service would expire on September 27, 1954, and he would be going back to the USA by then. The situation became more complicated when they discovered that Peggy was pregnant. Then Duane received bad news.

The Korean War ended with a ceasefire prompting the war department to shorten services and order troops to return home earlier than planned. Duane was given a week to return to his original station in Yokosuka. Peggy and Duane are both heartbroken and disappointed since he was about to leave Haneda Air Force Base.

Duane had enough savings and promised Peggy that he would send some money to her. After returning to Iowa, they kept in touch through letters, and Duane promised to send money to Peggy so she could come to America.

Duane rushed to the home of his parents and asked for the money he had saved for 3 years. His mother broke into tears and informed him, “Your father had a heart attack while you were in the Navy, and we had to raise your younger siblings, so he had to use all your savings.” Duane’s father is the next of kin on his savings account in case he was killed in the line of duty. This was a requirement, although unpractical.

Duane had no other choice but to get a job and earn enough savings for Peggy. He worked with Pembi Company Highways in the Midwest, a company that requires long hours of work. Peggy’s letters reached his parents’ house in the countryside, and it takes a while for Duane to receive them since he still has to travel from his place of work to his parent’s residence.

All the years of being separated and facing delays and an uncertain future were getting amid Duane and Peggy’s chances to be reunited. After a month, letters from Peggy stopped arriving. Duane was stunned. “On the other hand, I hope to work harder to find out what is going on because it still haunts me,” he said.

After Thanksgiving, Duane’s sister handed him a letter from Peggy. She informed him in the letter that she had married a man from the Air Force and would be moving to Wisconsin. Also, Peggy informed Duane that she lost their baby through a miscarriage.

Duane later discovers that Peggy’s letters haven’t stopped arriving at all. He learned that his mother had burned every single letter Peggy sent. Duane’s mother did not want him to marry a Japanese girl. His mother’s racist attitude towards people of Japanese and German descent was due to the post-World War II era. Although Duane never spoke ill of his mother or father, he let out his frustration by ripping the screen door through its hinges. He knew he was defeated. Everything was over.

Duane moved on when he found out that Peggy had married. Although his first marriage ended in divorce, he won custody of his 4 children (two girls and two boys). Within two years, Duane remarried and was blessed with a son and a daughter with his second wife, Janice.

Janice was a good wife and raised all 4 stepchildren like her own without hesitating. She was a good mother to all his children. Duane has a large family with 6 children who have all been successful and have families.

Since the time he was heartbroken years before, Duane tried to find Peggy after all the years that passed. He wanted to know two things: First, he wanted to let her know that he never abandoned her. Second, Duane wanted to know how Peggy lost their baby.

When Duane was 88 years old, he knew his chances of finding Peggy were very slim. When the age of technology began, Duane resorted to Facebook and sought help in finding his first love. Thanks to the internet, where people can “reconnect”, the wish of 91-year-old Duane Mann finally came true. After 70 years of searching and waiting, Duane had the chance to reunite with his first love, Peggy Yamaguchi.

Duane Mann’s love story written online spread all over the world until Japan. Many were trying to provide help and information. 70 years have passed, and a woman from Vancouver, Canada, knew Peggy and extended help to Duane. Duane and Peggy’s children joined forces and came up with a plan for Duane and Peggy to meet again. Duane was delighted upon hearing the news about the chance to finally meet his first love again. Of course, he wanted to tell the whole story to Peggy and that he never abandoned her.

The sweet reunion finally took place in a resort in Escanaba, Michigan. Peggy and Duane immediately reminisced about their love story in Japan 70 years ago.

“I thought about that all my life,” Duane said to Peggy. “That I… worried that you thought that I abandoned you. And I’m here to tell you that I didn’t abandon you at all. I just couldn’t find you.” Peggy immediately replied. “And with all of that remembering, and saved all the pictures. You must have loved me. Thank you!”

Duane showed Peggy 2 of her photos which he kept in his wallet for 70 years. It was his only way of keeping her close to his heart all these years. Duane left a big impression on Peggy.

Peggy’s son revealed in an interview that his middle name was ‘DUANE’. “Now I just came to light how I really got that name, and it wasn’t by happenstance. It was for reason, I believe.” Peggy’s son, Mike Sedenquist said.

Seeing the 2 elderly people talk and laugh and reminisce like they were teenagers is the most heartwarming scene anyone would experience. The story of the Korean War-era couple has now turned into a love story that is admired and touched everyone around the world.