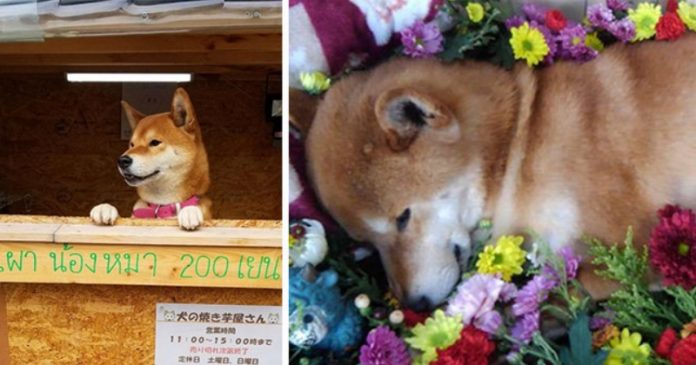 A loved one’s passing is a difficult time for many people in the world, especially for those closest to them. Likewise with the owner of this dog whose furry friend has crossed the rainbow bridge.

This is a story about a Shiba Inu dog who, since 2019, has become famous on social networks for the loyalty and help he gives to his owner, by taking care of the owner’s place of business.

This Shiba Inu became famous since the opening of the sweet potato stall, Inu No Yakiimoyasan, a stall located in Sapporo, Japan, and guarded directly by the little animal.

It might sound absurd, because a dog doesn’t know how to count, but it turns out that Ken-Kun has high honesty.

The stall became famous in Japan because of the dog. Many customers come to the place just to interact with the little furry fellow which is certainly very suitable for this business.

Ken-kun greets his buyers happily but at the same time, he pays close attention and makes sure the buyers make their payments.

Unfortunately, the furry kiosk keeper that has faithfully served its owner for all these years has died. The news was announced on June 6, via the owner’s Instagram account.

“Today, June 6 at 12:50 PM, Ken-kun has died. We got a lot of support from all of you, and I’m sure Ken-kun is very happy, happy in paradise. I feel reassured that he made it to his favorite stall before leaving. Thank you very much everyone!” said the publication.

The cause of his death has not been confirmed but Ken-kun has been ill since May 31 and has been treated at the veterinary clinic.

The day before his death, his owner reported that he had returned home but with oxygen tubes.

To date, there is no explanation as to what happened to the dog, which appears to have died naturally. On social networks, images of an emotional farewell to the pet were also shared.

The dog that worked for so many years is now retired and has gone straight to heaven. Share in your network the news about this dog who is faithful to its owner until the end.