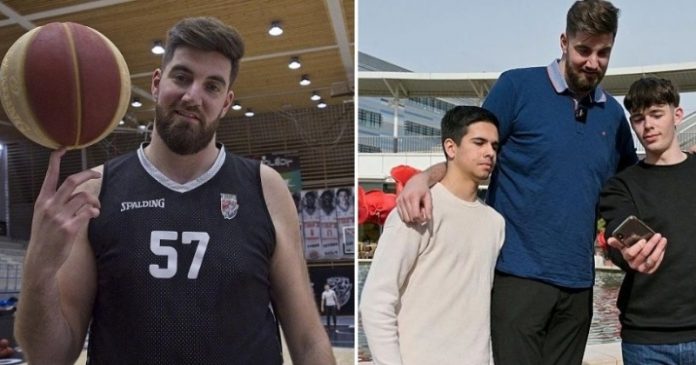 He is officially the tallest man in France and a professional player of Tours Métropole Basket (ProB). With his height of 2.22 meters (7’3″), this man gets noticed everywhere he goes.

Professional basketball player Vincent Pourchot from France does not take his height as a hindrance. He is officially the tallest man in the country and hopes to spread inspiration to people who suffer the same physical differences. He also uses his height to post hilarious videos on social media to inspire people, that led him to become a social media superstar.

“The age when I became aware that I was tall was when I was in primary school when I was eight years old, and I was six feet tall,” explains Vincent. He claims that he was even taller than most of his teachers in school.

Though his height was not normal to other people, this has never become a hindrance to Vincent. He was the club’s mascot for many years and has become much more when he started sharing some of his hilarious videos.

His first video on TikTok garnered nearly 200,000 likes overnight. Since then, he has accepted his status by being recognized as a “giant”.

“I took the plunge during isolation. One evening, I filmed myself dancing to demonstrate that it was impossible for me to see myself in full in the mirrors of my apartment,” he explains. “The video wasn’t great, but I posted it on TikTok anyway. What a surprise when I woke up!”

29-year-old Vincent Pourchot has 1.4 million subscribers, as of now, on TikTok. Most of his videos are hilarious as he utilizes his height of 2.22 meters to explore his daily life through videos. For instance, when he ducks his head before going through a door or sits on a chair while he cleans the dishes.

Vincent has become an inspiration to people who suffer the same physical differences. He hopes to extend the message to these people to see their difference as a superpower rather than humiliation.

“I’m comfortable with my large size, I live very well with it,” he explains. “Not everyone does. I just got a message from a boy being bullied at school because of his height. He assures me that my videos have given him back his confidence. I feel useful.”

“I was offered a good role in a feature film, but I had to be free for more than a month. It’s incompatible with professional basketball,” regrets Vincent Pourchot, when he has been approached by well-known film producers.

His status as a famous person in his country and everywhere else has inspired Vincent to pursue some more of his future goals. He would like to become a writer someday and continue to spread inspiration and motivation to everyone around the world as he promotes “The Strength of Difference”.

A 3-Feet Tall Woman from China was Abandoned by Her Husband; She Raised Her Son Alone and Built a Business Now Worth Millions