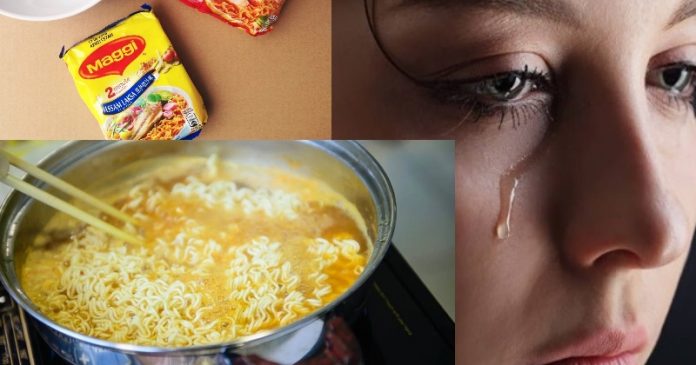 Apparently, that was the only food she can cook, and her husband had Maggi noodles every meal time. A bowl of hot noodles may be good to be served on some days, especially in cold weather or during snack time. Though it can be classified as comfort food for dire situations, it may not be safe to consume them every single day.

Recently, a man in India filed for divorce since he complained that his wife can only cook Maggi noodles, and these are what she only serves him during meal time.

A district judge who was handling the couple’s case later claimed that the husband and wife eventually went their separate ways after agreeing.

This odd divorce case was reported on Saturday, the 28th of May, 2022, by the The New Indian Express.

The judge who was handling the couple’s case, Judge ML Raghunath, called it the “Maggi case”. Apparently, he has been handling odd divorce cases in the past. According to the judge, the “Maggi case” was the story behind the man who filed for divorce because he was tired of his wife’s choice of serving him instant noodles 3 times a day. Sadly, the wife did not know how to cook other dishes, hence giving him noodles every meal time. The husband also said that his wife would not buy any other food from the store but only Maggi noodles, making him more frustrated.

Eventually, the couple continued to separate ways on mutual consent, and the husband was relieved.

Judge Raghunath revealed that the court has received divorce case files more unusual than the “Maggi noodles case”. From bizarre reasons like putting salt on the wrong side of the plate, and wearing the wrong wedding suit color, to reasons like, not taking the wife out. Some couples even filed for divorce on the same day they married.

Lately, the court has implemented a divorce law requiring couples to stay together for at least a year before they decide if they want to push through with a divorce.

Judge Raghunath said, “If there was no such law, there would be divorce petitions filed directly from wedding halls.”

Some cases end with a happier ending. While judges try to settle tough marriage arguments, some couples decide to get back together, especially those with children. Most of them prioritize their children’s welfare rather than theirs. “We use sentiments to bring a compromise among couples and reunite them,” Judge Raghunath explained, adding that the children may suffer more than the couple when they separate.

Over the years, reunions have become rare. There have been more divorce cases being filed recently, mostly from the urban areas. Law offices have noticed that the women in rural areas are more dependent and are forced to cope with their marriage situation in fear of society and family obligations. On the contrary, women who live in the cities are well-educated and are more independent financially.

People have been warned that consuming too many instant noodles can result in illness. Taking them day in and day out can be sickening. The man’s wife is no culinary expert. She may be only trying her best to be a good wife and feed her husband with whatever food she has learned to cook.

Communication between couples is a necessity, the key to a good relationship. Married couples should learn how to cope with their lives together and communicate to fix issues in their marriage. Better yet, before marriage, determine if one can live the rest of their lives with the other.

Deciding to file for divorce should be thought about twice before you move once. Petty issues can still be dealt with through thorough conversation. After all, marriage is not like food that you can feed yourself and then spit out if it is stale or no longer good. Make it work!

A 54-year-old Grandmother has Youthful Features, and She Looks Like Her...

Firefighter Who Delivered a Single Mother’s Baby Adopts Her After 2...