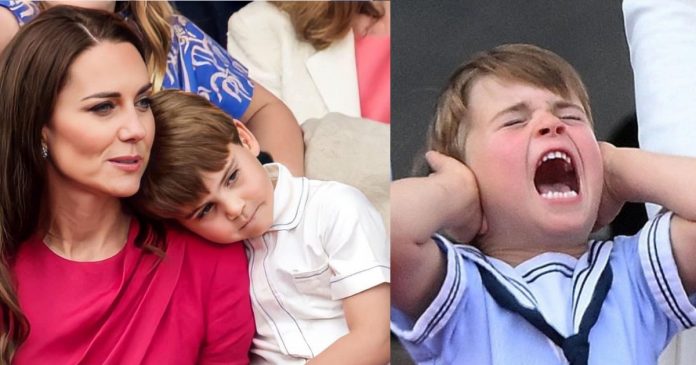 Being a typical child, little Prince Louis, the youngest son of the Duke and Duchess of Cambridge, felt moody at the recent Platinum Jubilee Celebrations held at the Buckingham Palace. He was unaware that his various hilarious facial expressions were caught on camera and became the topic of most social media stories. In some video clips shared, you will see the young prince unable to sit still while the festivities were ongoing.

4-year-old Prince Louis, the youngest son of Prince William and Princess Kate, is the youngest among the 3 children of the Duke and Duchess of Cambridge. Before him were Prince George and Princess Charlotte. The couple married in 2011. The royal family of 5 is happy, and their children have become equally famous as their high-profile parents.

Among the 3 children, Prince Louis made the rarest appearances in public. When he does, his chubby face and bubbly personality attract passers-by. He makes cute facial expressions and claps his hands to attract everyone’s attention.

In the recent event of the Platinum Jubilee Celebration of Queen Elizabeth II‘s 70th year donning the crown, Prince Louis attended with his parents and siblings. The 4-day celebration was a series of extravagant events. This 2022, Queen Elizabeth became the first monarch to serve 70 years wearing the crown.

Watching the events with his family and other royal family members, Prince Louis’ moody side became evident. His moods swinging from being bored to being naughty, the little prince was not shy to put on any hilarious facial expressions which he was unaware were being recorded live by the media and other citizens nearby.

On June 5th, little Prince Louis attended the Platinum Jubilee Pageant with his family at the Buckingham Palace. It was a long-running event consisting of more than 10,000 participants from across the United Kingdom and the Commonwealth, joining forces to combine street arts, music, puppets, carnival, and costumes to celebrate the Queen’s reign. Prince Louis appeared to have been bored and became restless in his seat. He did not hesitate to stand up from his seat and make hilarious facial expressions. His naughty side was beginning to emerge.

After some time, he returned to his seat beside the Duchess of Cambridge. Looking at the photos, it is evident that the little prince is close to his mother. In heartwarming moments, he covered her mouth with his hands and sat on her lap for a hug. These are the candid shots that touched the hearts of citizens around the world.

Let’s take a look at a video clip of the Duchess of Cambridge and the little prince enjoying the festivities at Buckingham Palace:

Among all the royal family members who were present at the celebrations, Prince Louis became the talk of most social media posts. His moody expressions went viral on the internet during and after the festivities.

Take a look at some of the posts that went viral on Twitter:

During the Royal Air Force jets flypast show, the little prince covered his ears to shun the booming noise of the jets. His adorable facial expressions became trending on social media. Several of his shots emerged on the internet, making him the most adorable royal attendee.

Prince Louis chatting with his great-grandmother, Queen Elizabeth II, is one of the most touching photos and videos that were posted on Twitter.

Some netizens noted that Prince Louis’s funny antics were very similar to his father’s, Prince William, when he was the same age.

Here is another comparison photo where the Queen was chatting to Prince William in one frame and Prince Louis in another.

On June 3, the Queen, along with the royal family members, made several appearances across the UK, including one at the Buckingham Palace. The 4-day event of the extravagant celebration was attended by members of the royal family, together with Queen Elizabeth II, including the Derby at Epsom Downs, and the Platinum Party at the Palace on the evening of June 4th.

The final day marks the event of the huge Jubilee lunch, in which 60,000 people have registered in advance to join. The event will attempt to break the world record of having the longest street party to back the garden barbecue.