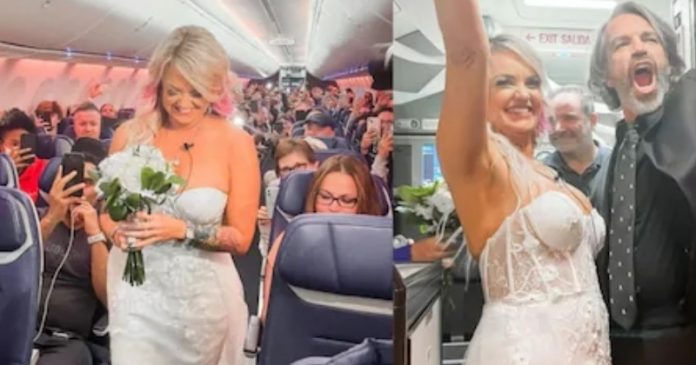 Marriage is when two hearts become one. A wedding is the celebration of two hearts becoming one. Every woman dreams of having the perfect wedding, while every man wants to marry the woman of their dreams. Recently, a couple from Oklahoma wedded in a way that they never expected.

The couple, Pam and Jeremy Salda, from Oklahoma City, have been together since August 2020. Come 2022, they joked about running away together and “eloping” to Las Vegas when they learned that airlines no longer require wearing face masks. Immediately, they booked flights for just the two of them bound to Las Vegas so they could marry on the 24th of April at 9:00 PM. They also booked hotels and connecting flights on their mobile phones. Due to spontaneity, Pam ordered a low-cost wedding dress online.

According to a representative for Southwest Airlines, the couple kept their plan a secret from family and friends. The airline shared its story along with beautiful images on Facebook. “Last Tuesday, Pam and Jeremy joked that they should hop on a plane to get married in Vegas. It wasn’t long before both realized that the other wasn’t actually kidding, so they booked a flight for Sunday on one of our competitors, with a Vegas wedding chapel appointment Sunday night. Come Sunday, the couple arrived at DFW from OKC, just to learn their connection to LAS was canceled. But that’s when their bad luck ended,” read the caption of the post.

Not waiting another day, the couple flew straight to DFW wearing their wedding attire. Upon their arrival, they immediately went on to their connecting flight to Las Vegas, only to discover that it has been canceled.

While waiting at the airport, the optimistic couple talked about how they can still get to their scheduled wedding on time. Another passenger by the name of Chris was touched when he overheard their story and offered to fly with them to Las Vegas onboard Southwest Airlines. So they hurried to Dallas Love Field and were lucky enough to grab the last three seats on the flight.

Luckily, Chris was an ordained priest and offered to marry them when they arrive in Las Vegas. Other passengers at the boarding area sent their blessings to Pam and Jeremy as they boarded the plane. Captain Gil, the pilot of the flight, noticed the couple wearing their wedding attire and asked Pam about it.

“She explained their story to him and joked that maybe they should get married on this flight,” a Southwest Airline representative said. “To her surprise, the captain replied, ‘Let’s do it!’”

▶Click the link below the photo to watch the video:

Crew members decorated the cabin with toilet paper for streamers and snack bags connected with strings to make a shoulder ‘binder’ for the bride and groom. Passengers participated by turning on the plane’s call lights to set the mood, and one passenger played a wedding march as the bride walked down the aisle. A flight attendant name Julie stood in as her bridesmaid.

One passenger took out an empty notebook that served as a guest list for everyone on board to sign, while another passenger offered a doughnut as a wedding cake.

Luckily, there was a passenger on board who works in broadcasting and is a professional photographer. He volunteered to take the couple’s wedding photos and filmed the entire celebration with 4K video equipment.

While Pam walked down the aisle with a bouquet in hand, passengers took out their mobile phones and filmed the heartwarming moment. During the ceremony, the passengers were cheering them on, and the couple was impressed. The wedding ceremony held at an altitude of 37,000 feet (about 11,280 meters) was a complete success!

A Southwest Airlines representative told The Epoch Times: “The entire crew on Flight 2690 was ‘very delighted’ to witness the couple’s special day. We congratulate the newlyweds and wish them well on their upcoming new life together as a married couple. Life is good.”

The wedding ceremony Pam and Jeremy originally planned for the coming month of August in Mexico will continue. This time, Chris and the crew of Flight 2690 are invited, together with family and friends.

Since the photos were shared on the Facebook page of Southwest Airlines, it has garnered 370K likes, 29K comments, and 84K shares.

“I love this!! Have been flying Southwest for years. Hands down to the best with great staff who make the flights fun! Thank you for all you do!!” wrote a person in the comment section.

Another person wrote, “Pam Tastic Congratulations!!! This was amazing! I love all of it!! Wishing you a lifetime of happiness. Thank you, Southwest Airlines, for sharing this with the world. This is something worth seeing. What an awesome story!!!”

102-Year Old Grandmother was Not Allowed to Attend Her Granddaughter’s Wedding;...