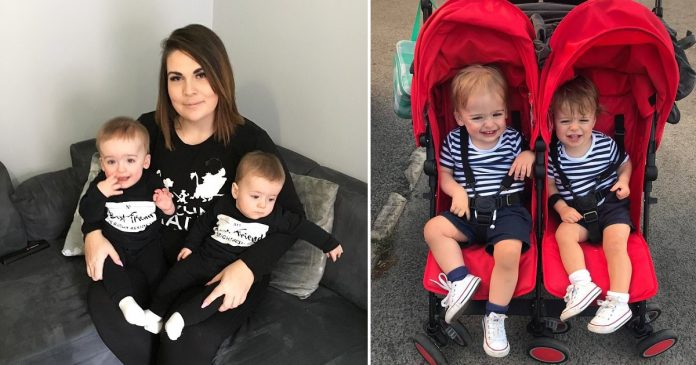 When people hear of twins, they expect them to be a replica of one another. Most of them wear the same clothes and have the same hairstyle, and people are unable to tell them apart. However, a very rare phenomenon called Superfetation occurs in 0.3% of women anywhere in the world. It is an occurrence of a second conception during pregnancy, raising 2 embryos of different ages in the uterus.

DailyMail UK reports that 30-year-old Gabriella Christmas from Bedfordshire, England, gave birth to twin boys in July 2018. The older brother was 2lbs. 2oz. heavier than the younger, and he was born taller than his brother. Gabriella was already confirmed pregnant, but after 3 weeks, doctors found that a 2nd baby has developed. They informed Gabriella that a second pregnancy is possible but very rare since the probability of occurrence is only 0.3%. It is called Superfetation.

Gabriella recalled that when she was pregnant with her eldest son, she went to the doctor for her regular check-up, and an ultrasound was done. She was informed by her physician that an unknown shadow was found beside her baby which made her worry.

She said: “I went for an early scan at about five weeks because I thought I was losing the baby. I had an internal ultrasound because it was so early. They said there was a baby and a shadow which could have possibly been another baby, but they didn’t know for sure because it was a lot smaller. At the 12-week scan, the doctors were worried because one was so much bigger than the other, and they thought that was because the babies were sharing a placenta.”

Gabriella said: “We went to a neonatal expert who said there were two placentas and two completely different pregnancies. The second baby was three weeks behind in his development because he was three weeks younger. So Ezra consistently grew three weeks behind Eduardo during the pregnancies. Even though he was younger, Ezra was the stronger of the two, and he was the one I could feel moving. I just didn’t know it was possible to get pregnant while pregnant, and I think that it’s important for women to know that it is possible for that to happen.”

Although the boys were born on the same day, younger brother Ezra is 3 weeks premature. Luckily, he was born in good health. “They looked different when they were born,” said Gabriella. “My little one, Ezra, was a lot smaller, so I had to buy clothes for my twins but in different sizes, and his skin hadn’t gone through the process of being less waxy, so he looked like a little old man. There was also a length difference, and there still is. I’m really fortunate that they were both healthy because there were fears Ezra would have to go into NICU because he was premature and his brother wasn’t, but he was a healthy, early baby.”

The twins are turning 4-years-old in July. Although they were born on the same day, the two boys have different personalities. Eduardo is calm and creative, while Ezra is while the younger brother is very enthusiastic and lively.

“They are twins because they were born on the same day and have the same genetic parents, but it was two separate pregnancies that happened at the same time,” explained Gabriella. “It was really hard to get our heads around the fact that I’d fallen pregnant while I was already pregnant.”

Gabriella admits that people do not believe that the boys are twins due to their height differences.

She said: “They still look different now, and people don’t believe they’re twins. They are absolutely twin brothers because they have that bond, but they couldn’t be more different. They’re like chalk and cheese. Eduardo is really calm and creative, and Ezra is boisterous and loves to trash everything.”

The world can really be full of wonders. Gabriella never expected to have twins that were conceived weeks apart. The boys are doing well and share an indestructible bond.