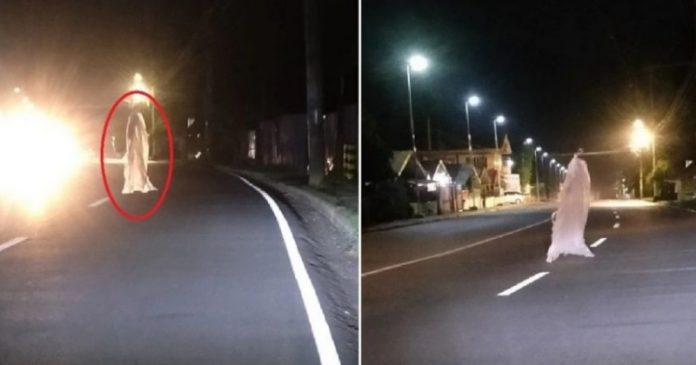 The incident happened on an evening of the dreaded superstition that is Friday the 13th. Some people believe to encounter “bad luck” when this certain day comes. It all comes from old tales that people pass on from generation to generation until some citizens believe them to be true.

A motorist stopped in his tracks when he encountered a certain “Woman in White” on the highway of Puan, Davao City, on Friday night, the 13th of May.

According to Warren Labadan, he was on his way home past 10:00 PM when he suddenly stopped his motorcycle and froze when he saw a ghost in white standing in the middle of the road at the bypass road fronting Reldo Village.

He felt like his soul separated from his body in fear of what he was seeing.

Labadan took the courage to approach the “ghost,” only to discover that it was only a large white cellophane bag tied to a live power cord.

He found out that a resident tied the cellophane on the low-hanging live wire power cable on purpose to prevent accidents that could happen to motorists passing by and not seeing the cord.

Earlier, two motorists in two different incidents were already involved in accidents on the road due to the neglected live wire cable.

Labadan immediately called the company to inform the owner of the cable to take action and immediately repair the cable. Labadan says, it may be more dangerous and frightening for motorists to see a large floating white cellophane that the residents tied to the cable.

Things that immediately frighten us at first glance may only be an illusion. It can happen to any of us. Though it may be quite a scare, gather the courage to know the truth before a lie consumes you. The White Lady scare has been going on for so many years, but no one has told anybody else a real encounter. They were all just hearsay.

A White Woman from England has Given Birth to a Dark...