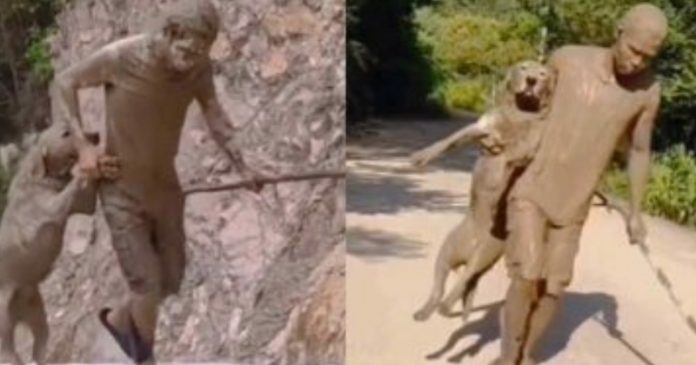 Compared to other breeds of dogs, the Labrador Retrievers eat more than the usual amount of food. Dog owners who have this certain breed will agree because Labradors are also quite greedy and have no control when they are hungry. Some people unusually compare a pig to a Labrador Retriever due to its irrepressible appetite.

A young Labrador Retriever aged 3 and below is very mischievous, and they are often compared to a Siberian Husky due to this. Additionally, Labradors love to play in water and mud. Once they see even a puddle of water or a place with watery soil, they are unable to contain themselves. If an owner is unable to control their dog from playing in dirty places, they somehow have an idea of what is to happen.

Some people may have remembered seeing this duo on social media sites. At first glance, you may think they are hilarious statues, but video clips show otherwise. The first clip shows a man covered in mud holding the front paws of his dog, and together they climb up the island of a staircase. A netizen shared these clips on the internet, and they instantly went viral.

Netizen: “It looks like a child from a distance, but it’s a dog when they come closer.”▲

Here is the story. A man brought his dog to the countryside to visit his relatives. He assumed that it would behave while staying in the yard. Suddenly, his neighbor’s child ran to him and said that the dog was playing in the mud. Angry, the man immediately wore his slippers, took a thick stick, and ran to where the child found the dog playing. When they arrived, the dog was indeed very dirty with mud and did not stop playing although its owner was calling. The man had to go into the mud puddle to retrieve his dog. He lost one of his slippers and was covered in mud.

Finally, although he was angry, he could not stand the muddy appearance of his dog. He took his dog home and bathed it. Most netizens who saw the clips and photos remembered how their parents scolded and cleaned them when they got home from play. 😆

DOG: My master thinks I was wrong this time. Next time, I will dare more. 😆 I tell you, you can play with confidence when you play in a mud puddle. My master may scold me, but he still cleans me up! 😆

After seeing the photos and clips on the internet, netizens left hilarious comments on the site.

“I thought it was a child at first, but later I saw that it was a dog!”

“Go home and then slowly clean up.”

“This big brother is not bad. To save his Labrador, he went into the mud.”

“The slipper on the left foot records the owner’s top speed.”

“The more I look, the more I want to laugh!”

“The child can still wash the dog.”

It is a dog’s nature to love playing, although most dogs love to play in places that make them dirty. As dog owners, we feel angry and helpless at times when our fur-babies are difficult to clean when they play in mud or water puddles. In the end, we still love them and take good care of them no matter how mischievous they are. After all, dogs can be trained and are very loyal to their masters.