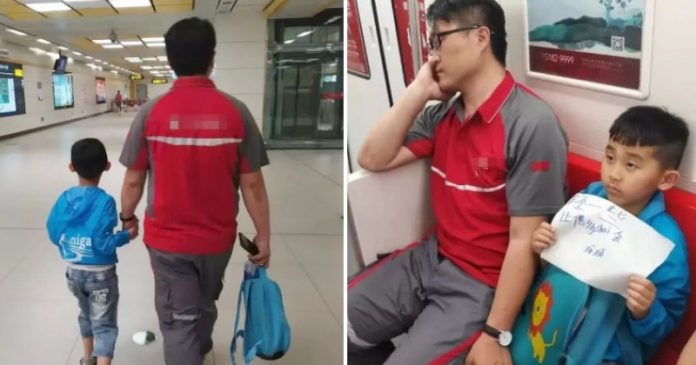 “Honor thy Father and they Mother.” That is the best gift you may present to them. They are full of love for their children once they are brought into the world. Parents are usually selfless with their devotion to their family, though there are times that they are unaware of the love that children have given in return.

Every person believes that it is the daughter who is gentle, caring, and understanding. Not true. A son can also have these characteristics. In fact, if both son and daughter are raised well, they may grow up into mature people and respectable to others.

Although there may be a difference between a son and a daughter’s way when dealing with their parents, a good son will express his respect differently, and give love to his parents in a way that satisfies them. In general, obedient children warm people’s hearts and give a good impression of their family.

A man who works in a courier company fell asleep in the MRT. His son beside him held up a note that stated he should not be disturbed. It was his way of protecting his father from riders who may awaken him.

An amazed netizen took a photo and shared it on social media, saying that the father is lucky to have such a concerned and loving son.

It was an early evening rush hour. A father and son duo sat by the train’s door on the way home. His father was wearing a courier uniform, and his son was carrying his schoolbag.

The netizen was seated diagonally across the duo. She noticed that when they entered the MRT, his father was sleepy from working all day. Once they were seated, the son whispered into his father’s ear. The father immediately fell asleep leaning on the train’s railing and placed his left hand on his son’s lap. It was evident that even in slumber, the father was still protective of his son. Just a little movement from his son would awaken him.

What is amazing was that the child was not restless. Upon seeing that his father was asleep, he just sat straight and did not make any unnecessary movements.

The crowd inside the train worried the little boy. Some of the passengers were unaware of his sleeping father. Assuming that his father may awaken from the slightest noise, the little boy had an idea. He wrote a message on a piece of bond paper saying, “Take it easy, let him sleep more, thank you.”

The child’s writing was barely legible, with big and small letters and some other characters. Bravely, he raised the message for everyone to see. Although he was feeling a little tired, he did not put his arms down to rest.

The child’s persistence while guarding his sleeping father and his firm stare touched the hearts of the passengers who witnessed the scene.

Later, when some of the passengers alighted the train in a station, they were careful not to disturb the sleeping father. The boy was still firm while holding the note for the other people to see. He assumed that they still have not arrived at their destination since his father has not awoken.

Presumably, this man is his son’s role model, and this little boy is following in his father’s footsteps. With proper guidance and attention, they grow to be good children who are grateful and considerate of their parents, with lessons learned at heart.

Guidance to parents on how they can raise grateful children:

1. When your child presents you with an offering, accept it calmly; do not reason out with a lie.

This is a story from long ago.

A mother had 2 sons. Every time she cooked fish, she eats the head of the fish while leaving the meaty part for his sons. One day, the son offered to give her a meaty part of the fish. She refused and said, “I only like to eat fish head, not fish meat.”

When she became old, she still had the habit of leaving the meaty part of the fish for her sons. Finally, the son opened up to her and said, “Since I was a child, you ate all the delicious fish heads and let us two brothers eat only fish meat. You refused to eat some meaty part that we offer you, and you never gave us a fish head. You are really selfish.”

Was she really selfish? Some people would say, ‘definitely not’. It is the son who was selfish instead of being grateful.

It was only when they started sharing fish that the son assumed she was selfish. It should have been a give-and-take situation. Since the son offered her fish meat and she did not like some, refusing calmly was correct. Though she should have offered fish head to her sons, too. They may have wanted a taste. The son could have asked, too. There is nothing wrong with requesting, especially in a nice way. Instead, the son thought that she was selfish since she never offered them fish heads. He assumed that their mother did not love them for this.

Also, it is safe to say that you have reserved the meatier part of the fish for your children. Do not lie that you don’t like fish meat. It is not wrong to offer, too. The children will have the habit of offering food willingly. What we should do is to accept the love that our children give and then thank them.

2. Teach by example and honor the elderly

Chinese TV host Dong Qing once said: “Your children will become who you are; so be who you want them to be.”

Her words may sound ordinary, but their meaning runs deep. Parents whose children see them respect their elderly and do not disrespect other people are perfect examples for their kids. What the children see from their parents, they usually imitate. A good education begins at home.

Here is another example. A woman lived with her in-laws after marriage. Although she did not get along with her mother-in-law, her children never heard a single bad word from her about their grandmother.

Years passed, and her mother-in-law was bedridden. The woman took care of her mother-in-law without any regrets. She served her food and drink, and gave her medications like clockwork. She sets the alarm at night to turn over the elderly woman, and she did this twice. The grandmother never had any bed sores.

Years later, her son was recommended by his school to a good university due to his excellent academic performance. At his graduation ceremony, his speech touched the hearts of the people who were present. With tears in his eyes, he said: “My mother is the hardest working person in the family. She has sacrificed for all of us these past years. The reason why I studied hard is to give my mother a good life and to repay her for her kindness and perfect upbringing.”

As parents, we should not expect anything in return from our children. A word of appreciation, a big hug, or appreciating what they have achieved is enough to fulfill us.

Gratitude is also understanding. It is a heartfelt appreciation. Understand what they need and want, support them, in return the children will appreciate them, and endless gratitude for their parents will suffice.

3. Let them go when the right time comes. Do not raise them to be dependent.

Parents who pay close attention to a child’s growing years, from infancy until they come of age. Psychologist Jean Piaget once conducted the “Genetic Epistemology”, his theory of cognitive development and epistemology in children viewed together. In his theory, children do not consider problems arising from other people’s points of view but their own feelings and practices.

It is not considered being selfish. It is just that the child’s normal thinking development limits his actions. When the child grows older and develops a certain ability to communicate with his peers, self-centeredness will gradually decrease.

However, busy parents who are not around while their children are growing up, but still do their best to tend to them in any possible way, can meet their needs. Though there is still that difference between children being raised with their parents’ undivided attention and children whose parents are never at home.

In this way, the children are not being guided properly, and the child’s “self-centeredness” will develop more, assuming that the parents value their work more than their children.

Therefore, we must nurture our children’s “growing up” years. Help them with homework and develop hands-on abilities at home while they are young. Like pine trees and bamboos that can withstand wind and rain, they will be raised to be independent.

Children as young as 3-years-old can be taught rules, starting at home. This way, they will always follow these rules and grow up walking the right path. By the time they are 7-years-old, these rules already may have been embedded in them by heart.

However, education should be imposed, though it may not be a simple matter. IF you want to raise educated children, nurture them while they are still young and be good examples to them. Set disciplinary rules and build a solid family foundation.

A Pregnant Woman Conceives a Second Baby 5 Days After She...