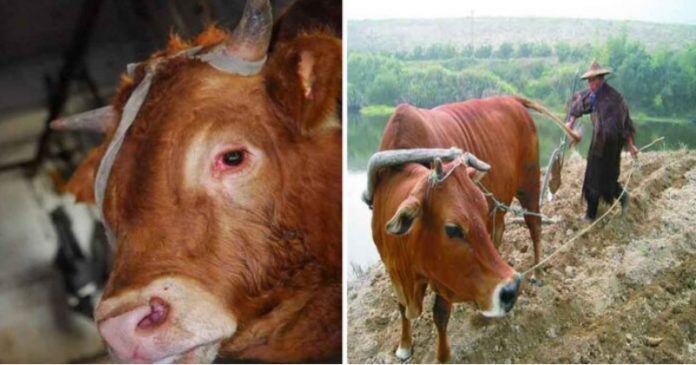 Even an old cow knows how to repay the kindness they have received from humans. No matter how big or small, they are grateful. They only can’t communicate in a way that we can comprehend.

This is a story about a butcher named Wang Xiao. 3 generations of his ancestors were also butchers. This is how they earned a living.

One day, Wang Xiao brought an old cow with him to be slaughtered. At that time, his neighbor, an elderly man named Li, was passing through carrying a medicine basket on his back. He noticed the cow Wang Xiao brought in and shook his head. He knew what would become of the cow’s fate, and he felt a slight sympathy in his heart for the ox.

When Li arrived home, he tried to forget about the cow since there was nothing he could do about its fate. That night, when Li was asleep, he was suddenly awakened by noises in his yard. He immediately got up, lit a candle, and went out to check. He was surprised to see a big cow standing in his yard! Looking closely, he noticed that it was the same cow that Wang Xiao has brought in that afternoon.

“Why are you here in my yard? Are you trying to frame me? If other people found out you are here, they might think I stole you from Wang Xiao’s house.” Li said, scared. He felt confused for a moment and thought about what he would do next. He thought that returning the cow to Wang Xiao would be proper although he knew of its fate. He was surprised that the cow would not budge no matter how strong he tried to pull it. The cow only stood there like a boulder. Suddenly, he saw that tears were falling from its eyes.

When he realized that the cow was crying, he felt a pang of guilt and sadness. That afternoon, he could not bear to think of its fate under the butcher’s hands, more so now.

The following day, Li went to Wang Xiao’s house alone. He explained that he wanted to buy the old cow rather than have it slaughtered. Wang Xiao was surprised that Li was ready to spend a lot of money on the cow.

“Uncle, you may realize, this old cow can’t work in the fields anymore.” Wang Xiao tried to discourage Li. In return, he said: “You should also know, the cow is very sad. If I don’t save it, then its only fate is to die.”

Wang Xiao sighed and said: “Forget it. I will sell this cow to you at a cheaper price.” Mr. Li then bought the cow for a smaller price.

Every day since then, Mr. Li brought the cow to a ridge and was seen from time to time returning with some wood. On one fateful day, when Li was preparing to bring the cow out to the ridge, it immediately kicked him on his chest. Li vomited blood, fell to the ground, and fainted.

Fortunately, someone brought Mr. Li to the hospital, though the doctor said that his injuries were serious. Hearing the news about his father, Mr. Li’s son rushed back home. When he learned about the misfortune that the cow brought to his father, in a fit of rage, he took a butcher’s knife and slaughtered the ox.

“How is my father’s condition, Doc? It has been 3 days.” Mr. Li’s son asked the doctor since Mr. Li still has not awoken.

The doctor shook his head and said: “His breathing has gone back to normal. The cow’s kick was not fatal. As to why he still would not wake up, I don’t understand why.”

After a few hours, Mr. Li suddenly awoke, sat up, and vomited blood which included an unknown object. The doctor checked Mr. Li’s condition, and he was surprised to see him feeling better. He looked healthier as though he was never sick.

“Mr. Li’s chest has been blocked for years. The foreign object was blocking his airways. After the old cow kicked his chest, he felt much more comfortable breathing. I think the blockage in his chest has gone,” the doctor said in surprise.

Mr. Li’s son made a sigh of relief and cried tears of joy for his father was safe. Though he felt regret for killing the cow that saved him. When he felt better, Mr. Li asked his son about the old cow. Feeling guilty, his son told him the truth. For a few days, Mr. Li felt sad about losing his cow.

Wang Xiao heard the news about Mr. Li and the cow’s fate. He was surprised, though felt happier for Mr. Li. The kindness he gave the cow has saved his life in return.

If it was not for the old cow’s kick, Mr. Li would still be suffering from the foreign object blocking his chest. Now that he has recovered, he lived a good life with his son and his friend, Wang Xiao.

The bride’s mother sensed something unusual about the groom after a...