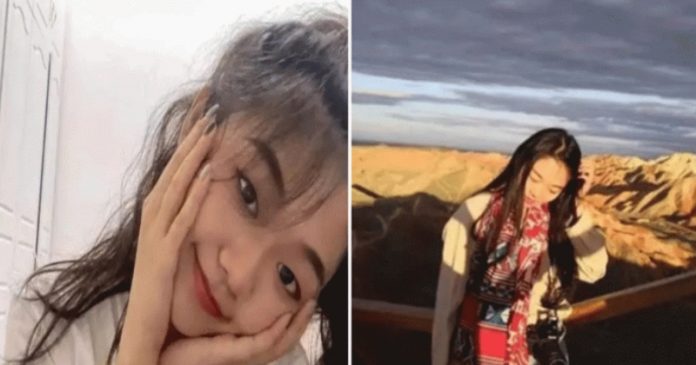 She was an angel here on earth who passed on. Before she died, she insisted on donating her eyes to whoever needed them. In the end, her organ donation has brought light to a little boy and a woman in her 40s.

21-year-old Ouyang Xinyi from Wuhan, Hubei, China, was diagnosed in October with a rare disease called Pleural Mesothelioma, a cancer of the lining of the lungs, known as the pleura. The cancer cells have spread throughout her body and her head, making surgery impossible. The young woman had expressed the desire to donate her eyes.

According to Chinese media, they reported that Ouyang Xinyi has signed an agreement in July last year to donate some of her organs to the needy. Thinking that it was too early for the young woman to talk about death, they did not take her seriously and even joked about the matter.

However, on August 6, she suddenly felt a headache. Her father accompanied her to the doctor’s clinic assuming it may only be a simple headache, but the doctor suggested that she have a Craniotomy, wherein a part of the bone from the skull is surgically removed to expose the brain. On October 14, doctors from Wuhan Zhongnan Hospital revealed that the young woman had a rare disease called Pleural Mesothelioma. The cancer has spread to her head, and surgery was no longer an option.

Ouyang Xinyi’s mother said that the young woman could no longer recover when her condition worsened. Ouyang remembered the organ donation agreement she signed on her birthday. She insisted on donating her eyes to patients who need them.

On the night of October 24, during her final moments, she kept pointing to her eyes since she could no longer speak, hoping that her family would fulfill her final wish of donating her eyes.

The young woman has acquired the qualifications of a teacher and considered going west to find a job when she got sick.

Young Ouyang Xinyi died a month after her diagnosis. When the organ bank doctor arrived, he said that the young woman was still very pretty even in death. Instead of removing her eyeballs as she requested, he removed both her corneas and were transplanted into a 3-year-old boy and a 43-year-old woman.

Rest in Paradise, Ouyang Xinyi, and thank you.