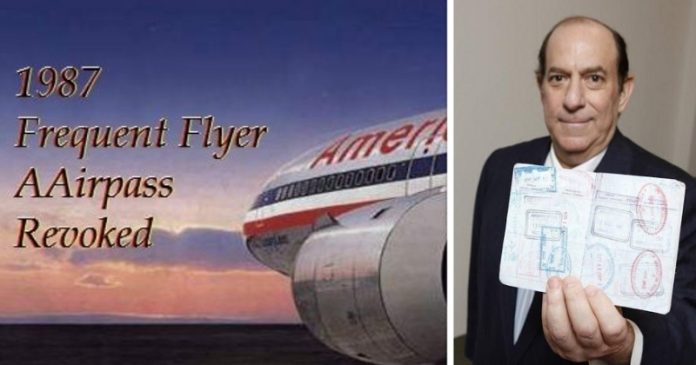 People travel for different reasons. Some people travel for business, and some for vacation. After all, there is a great sense of satisfaction when people travel to places they have never been before but have always dreamt of visiting. Though a certain frequent traveler took it too far after purchasing an unlimited air travel ticket from American Airlines.

In 2012, Steve told The New York Post: “I became a hero at the airline. I could just show up and get a seat. I could go someplace, and I wouldn’t even have to think about it. Just make the reservation and go.”

According to Wikipedia, the program called AAirpass sold 66 passes under the unlimited travel conditions, with the option of an additional $150,000 for a companion pass. American Airlines launched the program in 1981 when the company was struggling financially and in need of a quick infusion of cash. Most of the consumers who purchased the AAirpass were known personalities such as businessman Michael Dell, baseball player Willie Mays, and America’s Cup winner Dennis Conner.

Upon purchasing the AAirpass, Steve Rothstein began to maximize his powers by taking his unlimited flights as a common means of transportation. He also picked up random people at the boarding gate and made sure they fly home safely. He also helped a priest fly to Rome using his companion ticket to meet the Pope and allowed a friend to visit the Louvre.

In July 2004, Steve traveled to 18 destinations around the world, including Venezuela and Switzerland. He would even fly to Rhode Island to eat his favorite sandwich, a baloney, and Swiss cheese melt.

“Whenever I have the time, I fly to England to see its beauty,” Steve proudly said. “And I make time every week to fly to other countries and enjoy my free time. Sit in the square, chat with the locals, let go of the pigeons, and buy some small gifts. In the evening, take the plane home again and give a gift to the wife.”

Fraudulent activities came in when one time, Steve put made-up names like ‘Bag Rothstein’ on his companion ticket so he may use the adjacent seat for privacy or extra carry-on luggage.

He gave away 14 million air miles that he acquired, paying for a woman who needed to get back to New York immediately since she could not hire a babysitter. He also helped a friend get back to Bosnia. “I felt those random acts of kindness were exactly the sorts of things that we’re meant to do as people.”

When Steve and his friend were about to check-in for travel to Bosnia at the counter in Chicago O’Hare International Airport in 2008, a staff member of American Airlines handed him a letter stating the termination of his AAirpass due to fraudulent activities.

“I feel betrayed,” Rothstein explained. “They took away my hobby and my life. They essentially destroyed my persona. Our country is almost captive to big companies who have incredible power to do whatever they want to do. It’s hard to fight them. They signed a contract, and a contract’s a contract.”

Feeling that his rights and interests were damaged by the sudden termination of his AAirpass, Steve sued American Airlines in the United States District Court for the Northern District of Illinois. Since the airline company filed for bankruptcy in 2011, Steve’s motion was denied. In 2012, both parties were able to settle matters out of court, with Rothstein’s appeal and the airline’s counterclaims both dismissed.

Incidentally, not only Steve had his AAirpass revoked. Jacques E. Vroom Jr., a Dallas-based marketing executive, also faced the same fate. He has purchased both the AAirpass and the companion ticket for $356,000. Security personnel handed him a letter upon checking in at the London Heathrow Airport on July 30, 2008, stating his AAirpass termination due to fraudulent activities. The airline sued Vroom in 2011, accusing him of selling his companion seat, a violation of the American Airlines AAirpass rules.

Apparently, Steve Rothstein never got his ‘carefree life’ back, but he was able to travel the world more than any individual. For what it’s worth, he definitely got his money’s worth from it. Although existing unlimited AAirpasses remain valid for users who did not break any rules, American Airlines no longer offer a ‘lifetime or unlimited’ travel program. Frequent flyers are now being offered pre-paid fares at a discounted and fixed rate, for a minimum commitment of $10,000 a year per traveler.

Internet Celebrity from Indonesia Paid US $3,483.00 for Her Wedding Make-up...