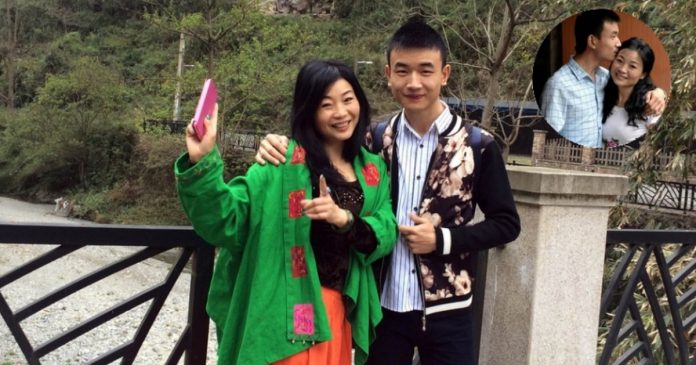 People fall in love every day. It is the most wonderful feeling we experience in our lifetime. May it be in reality or in stories we read, the essence of love is similar. People have various ways of expressing their love, though somehow if the feeling is mutual, all ends meet at the center. Romeo and Juliet, Tristan and Isolde, Cleopatra and Mark Antony are examples of couples who are bonded by true love. The emotion between a couple, if it is warm and sincere, will last a lifetime.

In traditional concepts, people find it normal when a couple’s ages are close together, maybe 2 or 3 years apart. If a couple’s ages are far apart, people start to be concerned. If a man or a woman has a partner twice their senior, it causes criticism from everyone.

Such a couple whose age difference is twice the younger person’s lives in Chongqing, China. The man is 23-years-old and the woman is a 46-year-old divorcee. They remained strong through problems in their relationship and believed in the saying, “Love is separated by mountains and seas, but I will cross them just to be with you.” The couple believes that love can conquer all, and they are confident about their future together.

He found happiness on his own

It was once believed that the wise do not fall in love. A friend once asked Tan Wanping if he had regrets when he started a relationship with Li Liangyou. He did not utter a word. He looked at his wife, held her hand tight, and proudly stayed with her through thick and thin. They did not have any care about the world.

Before he met Li Liangyou, Tan Wanping worked in the kitchen of a restaurant. He is tall and handsome and cooks delicious meals. He is gentle and considerate which makes him the fascination of most beautiful women he was working with. Alas, he has not met the woman he liked.

Tan Wanping’s parents have always persuaded him to find a suitable girl to settle down with. Although he is still young, his parents were in a hurry and concerned about his personal life.

Tan Wanping always ignored the nagging of his parents. He has met women whose parents liked him for their daughter. Although the women were gentle, considerate, mature, and simple, he did not feel it in his heart to fall in love with them. Sometimes, he felt like he was being controlled by his parents, trying to determine the course of his life. If only they would understand how he felt. Though for his parents, it was only a matter of time, and it did not matter if he was not in love. Tan Wanping did not want that. He wanted to marry the woman he loves.

Tan Wanping likes to relax and unwind during the weekends and pursue his hobbies. In his spare time, he likes participating in cycling competitions. He met 46-year-old Li Liangyou in one of the competitions. She is an experienced cyclist and has been doing the sport since she was younger. She is divorced but is unwilling to remarry since she has not found the right man for her yet. The two people met and immediately felt a connection.

Li Liangyou works in the administration department of a hospital. The experienced cyclist also loves literature and art. She is a member of the Chongqing Photographers Association and the Prose Association. Although she was married once, she chose not to remarry after her divorce and spends her days riding her bicycle. She admitted that she was not lonely before she met Tan Wanping, though everything changed when they finally met.

Soulmates meet in the crowd

The two people joined in a cycling race in 2005. They were both contestants, and neither of them noticed the other. Many other contestants were getting ready for the race. Although they both probably have seen each other before, they did not make an impression on each other at first.

And then fate happened. Li Liangyou suddenly fell off her bicycle due to improper balance, causing her to have a serious injury. She fractured her collarbone. Unable to move, the situation was life-threatening and critical. Tan Wanping was right behind her. Without hesitating, he jumped off his bike and helped Li Liangyou. Although he knew he was going to be disqualified for not continuing the race, saving a life was more important to him. He wanted to help the injured be brought to the doctor for treatment.

He accompanied Li Liangyou to the hospital and helped her pay for her medical expenses. Tan Wanping discovered that there was no one to take care of her, and they were both far from where they lived. He decided and chose to stay with Li Liangyou. At the time, he was simply concerned with the wounded.

Relationships are built when two people mutually understand each other. A bond is built, and feelings arise. Li Liangyou was deeply touched by Tan Wanping’s attentiveness and helpfulness. Unlike men his age, she saw a mature young boy. Gradually, she saw the young boy as a “savior”.

It was not so with Tan Wanping. During the time that they were together, he finally noticed the charms of Li Liangyou. Although she was not young, he was captivated by her beauty and mature temperament. She is brave and strong even after her divorce, and she lives independently. She loves to explore different places riding her bicycle. She is into literature, loves photography, and has a talent for writing. Although he knew that she was twice older than his age, he noticed that she has the aura of a young girl. Firm and very down-to-earth. Everything about Li Liangyou deeply attracted him.

The two happily conversed in the hospital. They realized that they both had common interests, hobbies, and similar outlooks on life. Gradually though unconsciously, the spark of love between them grew. Maintaining the strong friendship, no one dared yet to break the ice when it came to their feelings.

With Tan Wanping’s care, Li Liangyou soon recovered and was discharged from the hospital. Realizing that they were about to separate after the short time they had spent together in the hospital, Tan Wanping gathered the courage to confess his feelings. It was more than admiration. It was true love, and Tan Wanping was falling for her. Li Liangyou did not reject him. Instead, she held his hands which was a sign of mutual understanding. Li Liangyou has been looking forward to the day when she would fall in love again.

A bond that defies ages

Li Liangyou felt that this is her true love. She has waited for this for a long time. When her family discovered that her boyfriend was in his twenties, they did not hesitate to show support to her. Though the whole family knew, including Li Liangyou and Tan Wanping, that not all people will accept this kind of relationship. They knew there would be condemnation and people would oppose, hence the two of them prepared themselves psychologically for what is to come.

Tan Wanping’s family once persuaded him to bring home a girl to settle down with. When he introduced Li Liangyou to his mother, who was almost the same age as her, his mother said, “If you choose to be with her, get out of this house!” Tan Wanping did not expect this kind of reaction from his mother, since she has always been gentle all her life.

His father, on the other hand, tried to reason out with Li Liangyou. He spoke to her privately and alone. His father was more gentle, though he still opposed the relationship. He tried to get her to quit since he knew that the relationship would never be supported by many people. He assumed that the couple may be acting on impulse, and soon the spark will be gone, and so will the excitement. Tan Wanping is young, high-spirited, and is eligible to be surrounded by young and beautiful girls. Li Liangyou, though she is beautiful, is almost past her youth. The two of them are the topic of everyone’s conversation wherever they go.

At their wedding, Tan Wanping said to his bride, “Be my beloved wife, still my girl at the age of 100.” After their wedding ceremony, Tan Wanping did all the housework, spoiling Li Liangyou like a princess. Although their union is not favored by many people, until now, they live a very happy married life.

Although He was Happy to Get Married and be a Son-in-Law,...