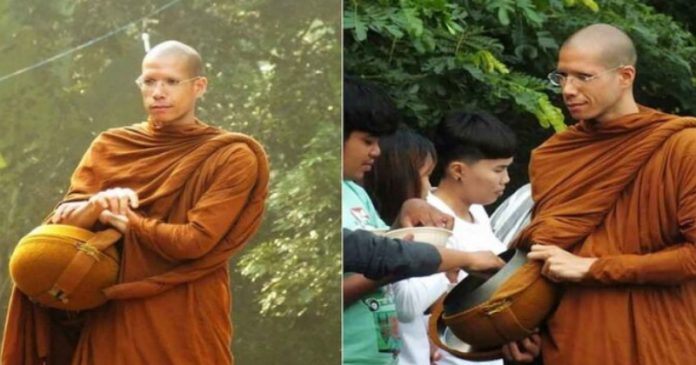 Meet Ajahn Siripanyo, a billionaire heir who renounced his wealth and became a monk. He is the son of Malaysia’s 3rd richest businessman, Ananda Krishnan. According to Forbes magazine, Mr. Krishnan’s net worth is US $5.4 billion, making him the 6th wealthiest man in Asia.

This is the story of how Ajahn Siripanyo gave up all his wealth and decided to become a monk.

Similar to other heirs of tycoons, Ajahn Siripanyo studied in the United Kingdom. After graduation, he worked in journalism for many years. He was admired by many people due to his looks, talent, wealth, and family background. Although later in his life, a choice he made left everyone shocked.

Many years ago, Ajahn Siripanyo attended a short-term ordination experience that changed his life forever. It became a turning point for the young billionaire heir and made him decide to become a monk.

Initially, Ajahn only wanted to experience a monk’s lifestyle by living in the forest for 2 weeks. He did not plan to join the monks, though his experience in the monastery completely changed when he learned more about Buddhism and the Sangha. 2 weeks became forever, and he never regretted his decision or turned back.

Wealth, fame and a luxurious lifestyle that ordinary people long for did not bring him happiness. Ajahn searched for his true calling by renouncing his wealth and choosing the lifestyle of a monk. According to tradition, monks are only allowed to have 1 square meal a day before noon and must go out to ask for food. This is the life that satisfied Ajahn Siripanyo.

Once he became a monk, Ajahn Siripanyo kept his identity secret and never revealed his name. Until one day, he came back to Malaysia with 68 Thai monks for a puja service. People recognized him, and news immediately spread across Malaysia and shocked every citizen who discovered the story.

Ajahn Siripanyo left everyone dumbfounded, though he was very calm. Everyone realized that his stature as a billionaire and his wealth was no longer connected to him, and he was in attendance to keep asking for alms, meditation, and preaching.

According to reports, when Ananda Krishnan learned of Ajahn’s ordination, he organized a search party that ended at a Buddhist monastery in northern Thailand. Saddened and shocked by his son’s sudden change of lifestyle, he looked at his son who was already a monk, wearing robes and asking for food.

He asked his son out for dinner. Ajahn respectfully refused. He said, “Sorry, but I cannot accept your invitation. Like all monks, I have to ask for food.”

Krishnan said: “Even though I am very rich, I cannot support my son. I am not allowed.”

Whenever Ajahn Siripanyo returns to his hometown, his family would still visit him. Ananda Krishnan still cares for Ajahn and gives him his blessing.

Ananda Krishnan followed in his son’s good deeds. In recent years, he has been seen participating in small charity works. Three years ago, Krishnan bought a monastery on a mountain in Penang and had it renovated with more than 30 rooms for Buddhist students to stay in.

Ajahn Siripanyo’s monk lifestyle and the story of Buddha Shakyamuni more than 2,500 years ago depicts the truth: “Life is precious, love is more expensive; if it is for freedom, both can be thrown away.”

Every individual is a writer of their own life. How the story will be written is according to your life’s choices.

Most wealthy people pursue their lifestyle. Some people decide to renounce their wealth for a life of simplicity, sublimation, and spiritual awakening. Each individual has a “calling”. It prompts us to decide what is worthwhile and important to fulfill our destiny in life.

A 5-year-old Syrian Girl Diagnosed with Autism has Memorized the Quran, Learned Many Languages and Can Solve Complex Mathematical Equations

Dad was aiming for a beautiful maternity photo — instead gets...