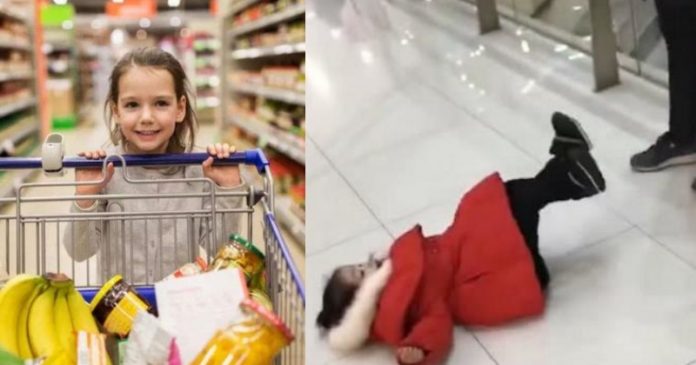 It may not be easy to bear a child or two, though every parent says, it is more difficult to raise them than to bring them into the world.

One weekend, a businessman named Mr. Wang took a rest day, and his wife had to work overtime. They have a 4-year-old daughter whom he brought to a nearby shopping mall. He took her to a play area so he would not have to bring any of her toys and worry too much about her not having fun while her mother was at work.

Unexpectedly, when they were roaming the shopping mall, his daughter fancied a beautiful model airplane on display in one of the toy shops. She grabbed her father’s hand and led him into the store. She did her best to convince him to buy the model plane for her, and when he checked the price, it was expensive enough for his wife to scold him if he buys it. He tried to reason with his daughter by telling her that she has enough toys at home and the model plane is expensive.

The little girl was not satisfied with what her father said. She pouted and said: “Daddy, I want the plane. If you won’t buy it for me, I will not leave this store!” She threw a fit and laid down on the floor. She did not care about the other people coming in and out of the store. Mr. Wang was firm with his decision. Although people were passing by, the father and daughter remained there for what seemed to be, more or less, an hour. Mr. Wang was feeling quite tired, but he still did not give in to his daughter’s request.

The minutes seemed like hours, and no matter how the father tried to convince the little girl to go home, she did not budge. The father, too, did not leave. The father and daughter duo fought wits for quite some time. It is unknown how much longer they stayed, though when a netizen shared photos of the incident on social media, mixed emotions from netizens were shared in the comments. Some said that the father was patient, and some said that he was cruel to his little daughter.

The mother is (usually) the “more lenient” among the parents. If a mother says “no” to a child’s request to buy something that she fancied, the child would throw a fit, and the mother would immediately change her mind for she feels pity towards her child who cries. On the other hand, the father is the more strict parent. He is usually the parent who imposes lessons within the family. Hence, when a child cries and expresses anger when a toy is not given, he does not give in. More often than not, he would even scold the child.

Crying and throwing a fit in public can be embarrassing for parents. Hence, they reluctantly give in to their demands. The children realize this, and they use the same method to get what they fancy when the parents hesitate to buy things for them. Though it has been very common for parents to buy things for their children to either make them happy or pacify them, even if the object they bought is unnecessary for the child.

What should parents do to prevent their children from throwing a fit in public?

Children have less tolerance than adults when it comes to resisting temptation. At a young age, they still have no concept of money and expenses. As long as they see what they want in a grocery or a shopping mall, they will try to convince their parents to buy that item they fancy. When the parents refuse, they feel disappointed and start crying and rolling on the floor.

If you want your children to behave when you visit a shopping mall, inform them of your intentions in advance. Tell them: “You can’t buy anything today when you go to the mall with me.” or “You can only buy one toy today.” Parents, keep your promise and be firm! In this way, once you are in the mall, the children would know what to expect. Good communication is the key.

We, as parents, can not expect our children to follow our instructions immediately. Their minds are still in progress, and it would take time for a child to establish following our lessons the first time.

If parents want their children to behave at all times when in public places, parents should remain tough with their principles and keep on reminding them about agreements. When a child has been informed that they cannot buy toys on that day, be firm when they throw a fit and keep on reminding them calmly about the agreement. Make this a habit. Remind them that punishment will be imposed if they misbehave. On the other hand, if the child behaves properly, a compliment should also be given. A reward can also be considered. Trust your instincts. They will be grateful.

Another discipline is to give a fixed allowance to your child, enough that you can afford to give on a routine basis. Instruct them to save money and not spend unnecessarily. If you cannot give them allowance on a certain day, inform them that the budget is not enough, though you will resume providing them allowance on another day. This way will exercise the child’s mind with the concept of money and how to budget expenses. If the child wants to buy a certain item, allow them to have an “advance” allowance, then give them a subtle warning such as: “Because you bought the toy and asked me for an advance in your allowance, you will have to wait until the next day I will give you an allowance again. Learn to be patient.”

Imagine a blank piece of paper is a child’s mind, and the parents’ teachings are the crayons that fill the colors on the paper. Children’s upbringing varies due to the different methods of the parents. When we impose, we should be the role models. What the children will see, they will follow. Be a good example. After all, learning does not apply to children only.

Let us take this story as an example.

A child has caused trouble at a store. He stained 6 clothes that were for sale in the store. The mother immediately took them away for dry cleaning. She was rejected. The boss warned her to buy the 6 items if they are not cleaned properly.

It may not be easy to impose a lesson on children at such a young age. Gradually, we have to give them lessons on proper behavior while they are young. In that way, they will not develop bad manners and be lawless.

Recently, a police station in mainland China received a call. They responded and when they arrived at the scene of the incident, they learned that the “situation” was caused by a child.

6 pieces of brand new clothing were sprinkled with mango juice. Ms. Luo then went straight to the laundromat for the clothes to be washed. If the clothes were not washed properly, the colors may turn out different, and the clothes may not return to their original state.

The salesperson of the clothing store panicked. She resorted to her boss about the situation, but Ms. Luo still ran to the laundromat to have the clothes washed.

The salesperson insisted on a deposit before Ms. Luo could take the clothes for cleaning. The police agreed that the approach was reasonable, and further explained to Ms. Luo that the responsibility lies with the parents of the minor who caused the accident. The police also suggested for the deposit to be paid first before the clothes could be taken to the laundromat.

In the end, both parties have negotiated and agreed. As requested by the boss of the clothing store, the salesperson charged Ms. Luo 45% of the clothes’ original price. The mother then took the clothes for dry cleaning. If they do not return to their original state, Ms. Luo will have to buy the clothes at full charge, and they will not be returned.

The parents should teach proper responsibility to their children. They should not be spoiled and be taught properly, else, they may grow up juvenile delinquents that may cause more trouble to their parents.

FACT: When the children get into trouble, parents take responsibility to clean up the mess. Parents should also teach their children how to properly face the “trouble” they are in to teach them a lesson. In this way, even the parents are taught a lesson on how to deal with their children.