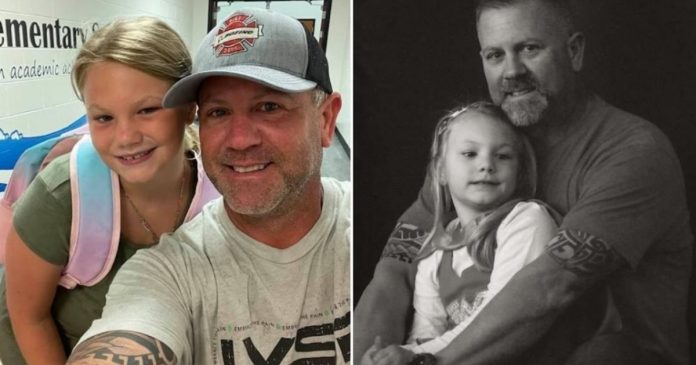 Adoption has become common nowadays for couples who no longer can conceive their own child. It also gives hope to children who need a new home when their biological parents can’t tend to them. Adoption is considered a “win-win” situation for both the couple and the child. The same goes for a firefighter who suddenly became a father 2 days after he delivered the baby of a single mother.

On November 14, 2011, firefighter Marc Hadden from Myrtle Beach, South Carolina, encountered a 9-1-1 call from a single mother who was suffering from abdominal pain. Marc responded to the call.

It was too late for the mother to be transported to the hospital, hence, Marc delivered the baby girl, who weighed 6-lb. 2-oz. He also had to provide emergency oxygen for the baby to be able to breathe on her own. “She struggled from the minute she was put in my hands,” recalls Marc, 48. “It was amazing to hear her cry.”

Hours later, the single mom was transported to the hospital and mentioned to Marc that she will not be able to raise her daughter since she is still struggling with a teenage son at home. Marc did not hesitate to raise his hand in case adoption is to happen. Marc and his wife Beth, already have 2 boys, Will, now 15, and Parker, now 13, at home. They were struggling to have another baby since she had complications during her first 2 pregnancies. They opted for adoption.

Beth says she remembers getting a phone call from Marc that day where he told her, “I delivered a baby.” Jokingly she replied, “Can we keep her?” He responded, “I think she might be going up for adoption.”

Upon learning of the biological mother’s dilemma, Beth felt obligated to visit her the next day. “My heart just went out to this woman,” says Beth, 39, an instructional coach at the local elementary school. “I brought her a little prayer book and asked if I could get anything for her.”

“Suddenly, the opportunity was there for me to say that Marc and I had been praying about adoption for years,” she recalls. “And she looked over at me and said, ‘I want you to adopt my baby.’ She had the nurse bring her in, and I was able to hold Gracie for the first time. I called Marc and said, ‘I think we just had a baby.’”

“She is what we prayed for,” says Beth. “It felt like winning the lottery.”

“We told her pretty much from day one,” says Marc. “I’ve taken her to the back of the ambulance where she was born, so she knows — no doubt about it.”

Always wearing bows, tutus, and practicing gymnastics, Beth says she’s still a “tough little joker because she has two big brothers who have trained her right.”

Grace turns 11 this year on November 14.

Marc and Beth’s story touched the hearts of many people. Some of them mentioned that it was a blessing that Marc responded to the 9-1-1 call.

“I’ve always wanted a daughter, and this is just amazing,” says Marc, and Beth adds: “Sometimes the best things in life happen in the blink of an eye — and you can’t let them pass you by.”

Every single day, Marc and Beth are thankful for the blessing that has arrived in their lives 11 years ago. The couple is very happy that Gracie entered their lives.