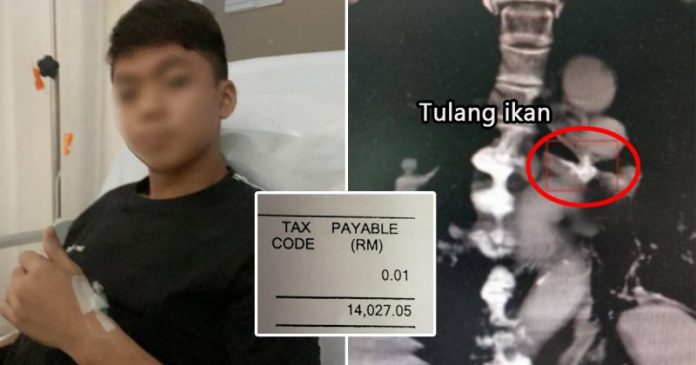 To some people, fish is delicious. To some people who do not eat fish, the reasons differ. Most of them are afraid to swallow a fishbone, which could be traumatic to those who have experienced this.

A few weeks ago, a young boy from Malaysia uploaded photos on Facebook and shared a story on how he spent $3,345.35 (RM14,027) on his medical bills when he accidentally swallowed a fishbone that got stuck on his tonsils.

He admitted that he enjoyed his fish meal since it was delicious and expensive when he accidentally choked on the bone.

With a feeling of pain, he rushed to the hospital and the doctor who examined him said that the fishbone got stuck on his tonsils. Immediate surgery was done for it to be removed. The young boy admitted that it was the first surgery he has undergone in his life.

After the procedure, he laughed at himself saying that he did not expect the incident to end this way since he assumed that expensive fancy fish would have not many bones and was very delicious. His medical bills totaled to US $3,345.35 (RM14,027.05) for the surgery and doctor’s fee. Luckily, he had insurance, otherwise, the bill would be more expensive.

His Facebook post caught the attention of netizens and family and friends who prayed for his quick recovery.

He has received comments such as:

“That fish gave you an unforgettable experience.”

“If the fishbone was still there, engrave it in gold as a ‘sign to remember’.”

Some netizens said that even when the procedure was quite expensive, he was fine afterward. Some also expressed sympathy since they too had a similar experience swallowing a fishbone and got treatment.

The young boy reminded everyone in the comments to apply for insurance, for fewer expenses.

According to HelloDoktor, the tonsil is a type of lymphoid tissue that is located on the surface of your respiratory tract and digestibility and is one of the body’s most important immune systems. This lymphoid tissue consists of a type of cell called lymphocytes that are important to act against disease, which consists of 3 types namely adenoids located behind the nose, lingual behind the tongue, and palatine in the throat. It serves as the first line of defense against foreign pathogens, namely organisms such as germs, bacteria, and viruses that can cause infection.

Even the slightest obstruction that gets stuck on the tonsils, such as a fishbone, can cause an infection that can lead to tonsilitis, and the consequences could be dangerous.

See Hua Daily once reported that there was a 78-year-old man in China who accidentally swallowed a fishbone when he was a teenager, and it was since then stuck in his trachea for 60 years. He ignored this since he assumed that the fishbone would easily be digested and would come out naturally through his feces.

For years, the elderly man suffered chest pains and unbearable cough. During a doctor’s check-up, he learned that they were caused by the fishbone in his trachea. He eventually underwent surgery to remove the fishbone. Apparently, if the fishbone was stuck in a more dangerous area of his internal organs, the consequences may have been fatal.

In October 2021, an elderly woman named Liang was having a fish meal when she accidentally swallowed a fishbone. She started having back pains since then. She suspected that the fishbone she swallowed may have gotten stuck on her esophagus, so she tried to relieve this by swallowing several rice balls, assuming that the fishbone will stick to them and eventually get digested. Unfortunately, this method did not relieve her of her pains, and she still suffered.

She finally consulted a specialist, and after a thorough chest CT, they found the fishbone stuck in the middle of her esophagus. It had penetrated the esophageal wall and the inner wall of the woman’s thoracic aorta.

The aorta is the largest blood vessel in the human body and is connected to the heart. Luckily, the fishbone did not go into her aorta and was removed in time. Otherwise, it would have been fatal. If it was left untreated, a simple fishbone can infect the esophagus and the aorta, and it can be life-threatening.

Fish is delicious, no doubt. When enjoying this seafood delicacy, take extra precautions and quickly remove fish bones before eating. If you accidentally swallow a bone and feel discomfort, seek immediate treatment to avoid serious consequences.