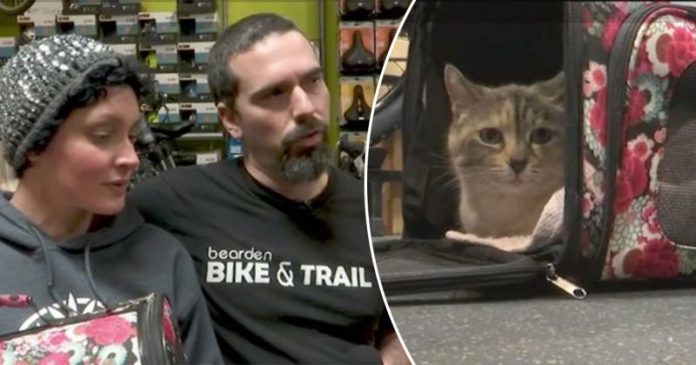 It may sound impossible for a moggy breed to be missing from its home for years. Though recently, a couple was more than grateful when a kind-hearted civil servant returned their furry baby after she has been missing for 7 years. He drove 2,000 miles to guarantee its safety back home to the owners.

In 2014, Joe and Leanna Drnec adopted a cute cat when they lived in California, and named her Ebi. The couple moved around a lot, though they finally settled in Knoxville, Tennessee. By the time they settled, they lost their beloved cat, unknowingly. Although Ebi had a microchip, she remained missing.

One day, a phone call from an animal shelter in Jurupa Valley, California, informed Joe and Leanna that 8-year-old Ebi had been found, not far from where they lost her.

Riverside County Animal Services chief John Welsh said Ebi had been dropped off as a stray at the shelter in January, and when he scanned the chip of the cat, it led them to the Drnecs in Knoxville.

Welsh traveled by plane with Ebi more than 2,000 miles to Knoxville, which included stops in Phoenix and Nashville. He used his own money since taxpayer money can’t be used on personal pets.

“She was primarily an indoor cat,” Drnec said, according to a Facebook post by Riverdale County Animal Services. “But she just went crazy at the door, always wanting to go outside. We allowed it, but my wife always supervised her. She eventually was an indoor-outdoor cat. But one day, she did not come back.”

“When you see so much bad on the news and in the world, you see something like this; it reminds you of the goodness in humanity and just there is so much goodness out there still,” Joe said. “It’s been such a long time. We never thought we would ever see her again.”