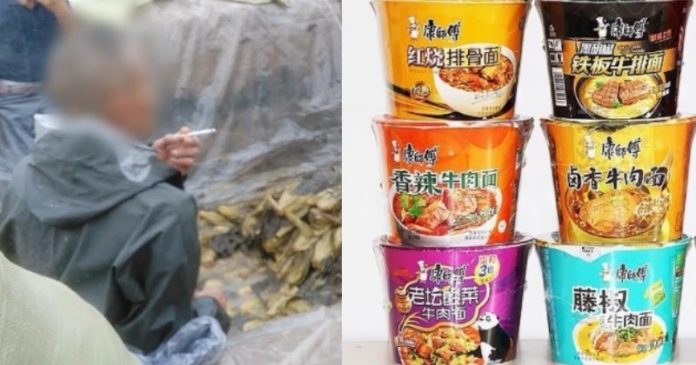 Master Kong, one of the famous instant cooking noodles, has recently stated that they have cut ties with their vegetable supplier, Hunan Chaqi Vegetable Industry Co., Ltd., suspended all manufacturing of products and pulled out all related products on supermarket shelves, pending investigation and testing of regulatory authorities.

According to the China Media Group, Master Kong released a statement that the Hunan Chaqi Vegetable Industry Co., Ltd. supplied pickled vegetables (sauerkraut) to 4 of their factories located in Jiangmen, Wuhan, Xi’an, and Xinjiang. Since discovering reckless sanitation provided by the supplier, they have cut ties with them. Master Kong has apologized and promised to partner with more trusted suppliers in the future.

Reports from the CCTV’s 3.15 evening party revealed that Hunan Chaqi Vegetable Industry Co., Ltd. supplies pickled vegetables, but their products are divided into two types. The vegetables for export are manufactured in a clean factory, while the others which are sold in China are made in muddy grounds, which consumers called “the pit”.

In the fields, where workers make pickled vegetables, are muddy grounds littered with cigarettes, and workers were found smoking and stepping on the vegetables with their bare feet as they worked, China Media Group reported in an investigative story recently. The Red Star Capital Bureau watched the CCTV clip and found that the pit was not clean and hygienic.

The topic with the hashtag #MuddyGroundPickledVegetables topped China’s social media platform Sina Weibo, with 180 million views and 30,000 discussions as of press time. “I would never dare to eat such pickled vegetables,” commented one social media user.

The official website of the Chaqi vegetable group shows that it has established strategic cooperative relations with a large number of well-known establishments such as US fast-food chain KFC and Uni-President Enterprises Corp. in product processing and direct supply of raw materials.

On March 15, the Red Star Capital Bureau tried to contact Master Kong Holdings (00322.HK) via their public trunk line, but to no avail. The bureau also noticed that in the official store of Master Kong (Tmall), boxes of the pickled vegetable instant noodles were stored away, and the ones on display were removed from the shelves.

In addition, the anchor of the China Media Group live broadcast room said: “The employees in the live broadcast room still cannot comment on this, and I also understand them. The result is not out yet, let’s wait for the processing result. Uni-President strictly manages suppliers, and there will be public announcements in the future.”

As of late, Master Kong Holdings’ decline has slowed to close at HK$13.54.