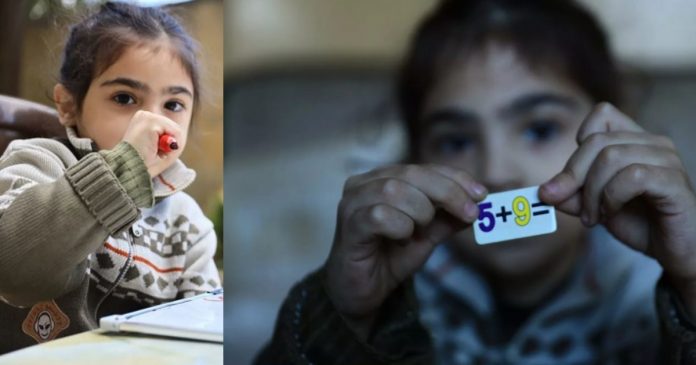 A young girl with bright beautiful eyes and an inquisitive mind timidly smiles and observes people as they pass by. She has been diagnosed with autism when she was 2-years-old but has been classified as a child genius.

5-year-old Sari Azzam from Syria loves staring at the stars at night. Her mother, Abeer Issa, wished upon them and regarded Sari as a “gift from heaven,” she said during an interview with Sputnik News.

Sari is not the only member of the family with autism, her elder sister suffers from the same disorder. She was diagnosed with autism when she was two, though she managed to write down her first words at the same age. Now 5-years-old, when she wakes up in the morning, she spends hours watching YouTube videos, learning different languages such as English, French, Korean, Japanese, Greek, and Spanish among others. She is proficient in reading and writing in these languages.

Not only is she proficient in languages, but Sari has also memorized the Quran when she started reaching the age of two. Nowadays, she is also able to solve complex mathematical equations.

Majd Al-Alousi, a specialist in Autism and Down syndrome, has performed various tests and x-rays on the little girl and confirmed that her condition is rare. She can perform tasks adults are capable of doing, though she needs more guidance on developing communication skills as she has a very inquisitive mind and is eager to gain more knowledge. Sari has “fast and accurate visual memory”.

“Sari has been diagnosed with autism spectrum disorder and gifted child syndrome,” Al-Alousi said. “This syndrome enables the infected child to perform tasks older than her age such as learning languages and solving complex mathematical equations, and making the child possess extraordinary abilities but always need support to develop communication skills as well as enrich her knowledge with more academic studies. She has many talents, most notably quick and accurate visual memory, where she can accurately memorize and retrieve what she sees in the long run, and Sari has a love of learning and a passion for science, so I see it as an important world project in the future.”

Sari’s mother wishes for her to be raised on the right track and be given special care. She is a brilliant child, and she deserves to be provided with all her needs and fulfill her aspirations.

Sadly the Azzam family suffered greatly from the scourge of war, living on low standards and displacement. Sari could not be provided more than only a tablet, a simple mobile phone, pens, and papers to fulfill her needs for knowledge. She can access the internet for the information she requires for learning.

Similar to other Syrian children, Sari does not dream of a life of luxury. She is content with learning more and acquiring more knowledge and someday dreams for the world to be a better place to live for more children to come.

You may watch Sari and witness how brilliant a mind she has while she says the alphabet in Greek.

A Danish Mother Gives Birth to Triplets 3 Years After She...