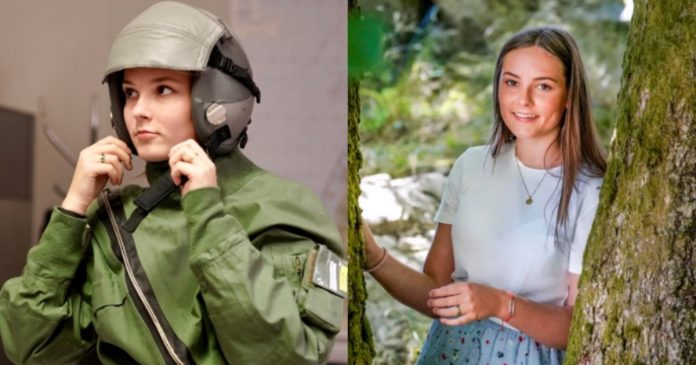 Elegant, noble, a little temperamental… that is how everyone would picture a princess, may they be a member of any royal family in Europe or any of the various heroines we see in fairy tales. A real-life princess is usually compared to a cartoon version by children since most of them only get to see princesses on television or in the movies.

18-year-old(Born January 21, 2004) Princess Ingrid Alexandra from Norway is not your typical princess, nor can she be compared to any fairy tale version. She gets involved in many outdoor activities and flies a fighter jet at a young age which causes quite a stir among the media. Her beauty and courageousness make her stand out among the rest.

Norway’s Beloved Fairy-Tale Princess
It is to no surprise that all these years, royal families have been the center of attention, especially the Royal marriages in recent years that have caught the spotlight and were viewed by citizens around the world. Although they were behind the world’s recognition, Norway has the “coolest royal family”. Born in 2004, Princess Ingrid Alexandra showed a different “side” of royalty. She has bright and expressive eyes, an ethereal aura, and a prominent appearance that Norwegians have called her the “fairy tale” princess.

Although she is famous and loved by her people, she displays no arrogance. She can be royal and maintain her cheerfulness during special occasions. Her personality shines even when she is amongst a crowd. She is talented, intelligent, and her learning ability is excellent. Norway has had the “absolute primogeniture system” since 1990, which means that Princess Ingrid is to become Norway’s first queen in over 600 years since she is a firstborn daughter.

Serves in the military
Even the princess was no exception. When she grew up, Princess Ingrid had to fulfill her national obligations. It is upon Norwegian royal family tradition that she reports personally at the military base when she reaches age. At the base, she was required to wear the traditional military uniform, take the Royal Air Force Base orientation, and train to fly an F-16 fighter jet as it circled over the skies of Norway. Both men and women of legal age are required to serve in the military, so the princess had to undergo rigid training and participate in military activities last year (2021). She bravely did all the challenges with confidence and a smile on her beautiful face. She was very optimistic.

Photos of her training and her co-trainees were shared on social media, and they show how the Princess skydiving and jumping from high buildings. She was fearless and always positive during her training, and she welcomed all her challenges with a smile.

Active in outdoor sports
In addition to her skills in the military, Princess Ingrid is also active in sports. She engages in activities like boxing, skiing, and surfing. When she was younger and still learning how to surf, she admitted to being afraid, though she bravely stood on the surfboard and rode the waves. In recent years, she started competing and won in the National Youth Surfing Competition. She has a graceful and dignified personality fit for a Queen, though she remains beautiful and brave when engaging in outdoor activities. People who know her personally describe her as “dynamic and quiet”. She is the perfect epitome of a future queen at a young age, and Norwegians are looking forward to Princess Ingrid becoming queen. She has always been compared to Merida in the animated movie “Brave”, due to her confidence, fearlessness, and bravery. The future queen of Norway has a lively personality and shines a bright light among the royal family.