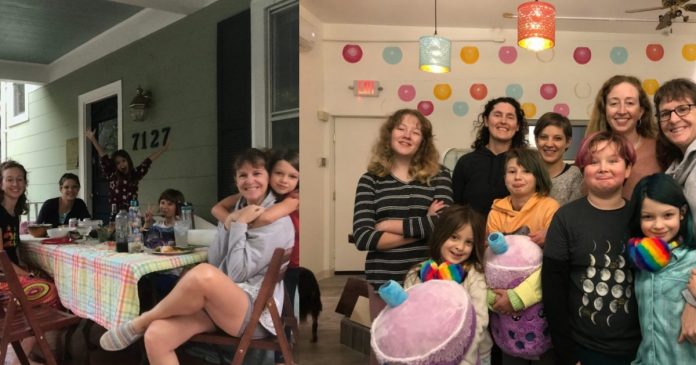 Everybody dreams of buying their own house. They save enough money for months or years to reach their goal. Though nowadays, buying even just a small house costs so much. This is a story of 3 single mothers who combined their finances to buy a house for themselves and their children. They have saved US $132,000.00 (about 830,000 yuan) in 1 year for their new home.

The 3 single mothers came from different cities, and they have combined their savings to buy a home. They live a stable life with their children, and many people are surprised with the results of their living stability and the happiness they shared in their home. Their house has a huge backyard which their children describe as “an amusement park at home.”

Holly Harper from Washington, USA, struggled after her previous divorce. Living a hard life and supporting her daughter on her own. Although she promptly paid for her monthly rent and other expenses, she lived a balanced life, neither rich nor poor.

“Finances were tight, so I decided to buy a house together with other single mothers.”

The 3 single mothers planned and saved money and successfully bought a house with their combined savings. The house was built in 1927 and they called it their “single-family” home. The three women spent more than $10,000 (about 270,000 Taiwan dollars) in renovations and decorations to assure themselves of a comfortable and secure home. Although the 3 single ladies have spent a lot of money on repairs alone, they consistently deposited money into their joint account, and it is safe to mention that their daily lives were not affected by any financial problems.

After months of renovations, the house is finally done and complete. It has become a safe haven for the 3 single mothers and their children. They have transformed their backyard into a mini amusement park for their relaxation and enjoyment. The children’s bedrooms are filled with their toys and bookshelves were installed in each room. There is also a common library inside their home. Their storage facilities have equipment for making marshmallows, waffles, and ice cream, and their huge backyard has a garden for growing flowers and vegetables. They have also installed some entertainment facilities so they can relax and unwind with the kids on day’s end.

When the 3 single ladies and their 5 children finally moved into their home, they discovered that each of them have owned items that are rarely used but often needed. They have shared most of these items and spared unnecessary expenses in their daily lives. Trivial expenses were kept to a minimum, saving them a lot of money in the process. Holly and the other women realized that they can save at least $30,000 a year (approximately NT$830,000) after they have moved in together in one house.

Sharing a home with your BFFs or other trusted friends or relatives may have their benefits. After all, life can be happier with good companionship. I wonder if other women are experiencing a similar situation like this… Meanwhile, share this article if it put a smile on your face.

A Rich Man Returns to His Wife’s Hometown 5 Years After...