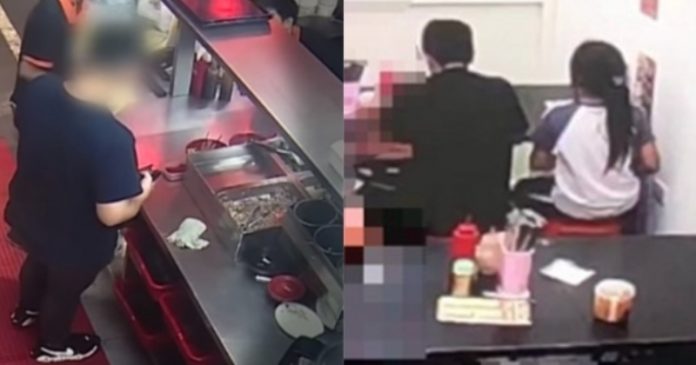 Doing good is not how much money is spent for the convenience of others, but also the sincerity of sharing with others, too. Many people in society choose to give quietly, with anonymity to avoid praises.

A mother shared one example, a story of a small gesture a foreign man made to make their family feel full of warmth.

A mother shared on the “Regular People Doing Big Things” Facebook group that day, that a minor accident on the road caused her not to be able to get home on time. Because dinner time was going to be delayed, she asked her eldest son to take his younger sister to a nearby restaurant for dinner.

Taking into account the family’s economic condition, the children only ordered one big and one small duck rice. They are also heard saying that they will wrap up any food that is not finished. They didn’t expect that a guest who was eating behind them had secretly heard everything.

In the restaurant’s CCTV you can see a male customer dressed in black. After observing the situation of the brother and sister, the man walked to the counter and said that he would pay the bill for the two children. He even told the waiter to add extra dishes to the food they ordered. After feeling his concern, the restaurant waiter decided to add vegetables and two bowls of soup, so that the children could “eat more nutritious food and have their fill.”

When the children finished their meal and were about to pay, they discovered that someone had paid for their meal. When their mother learned of the matter, she returned to the restaurant in hopes to thank this kind man, but he had already left.

The mother wrote a thank you note in her post and wished the man would read it: “Thank you! I hope you can see this. Thank you for the care.”

The warm thank you text also attracted more than 7,000 likes.

“There is warmth everywhere in the world.”

“It’s very heartwarming to everyone, the owner and employees of this shop are also very loving.”

The restaurant also received an interview after the incident.

A few days later, the good man was found. He was actually a celebrity chef at a restaurant.

He is famous for his extraordinary cooking methods.

The stranger was Luo Shirong, a 29-year-old man who opened a shop at the night market three years ago, and with a shy smile, he said: “I was poor when I was young. When I saw the young brother and sister eating without their parents, I remembered when I was little. I dared not to eat because I had no money!”

He also frankly said that he was very satisfied when he saw the children were able to eat to their fill.

This display of secret care is touching. Even if it’s just a small favor, it made the whole family feel full of warmth!

Good people are everywhere. Spread love and care to everyone, and they will surely come back to you when they pay it forward.

Disney Fulfills Wish of a Girl from England to Have an...