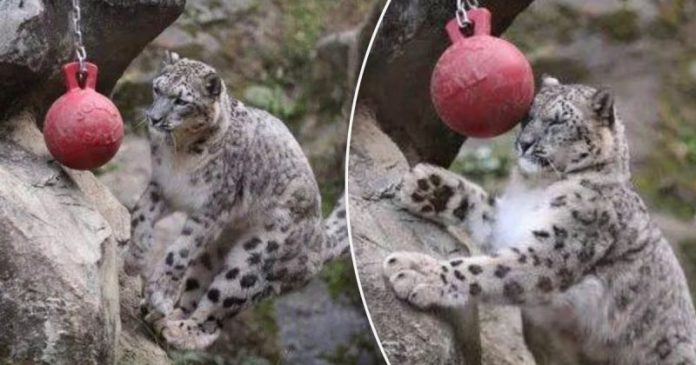 Watching a snow leopard at play can be very relaxing. Its agility, flexibility, and enjoyment are simply satisfying. A young snow leopard playing with a red ball was caught on video, and netizens found it very entertaining.

A bouncing red ball was hung at his cage so the young snow leopard can entertain himself. He was very curious about the ball at first. Gradually, the snow leopard started punching the ball, which swung back and forth. Now, he found this very interesting until he started jumping around mimicking the red ball. The snow leopard’s agility was on full blast, and he was having fun catching the red ball and releasing it.

However, there were times when the ball swings too far. That moment when the ball comes back fast enough and the snow leopard misses catching it, and it suddenly hit him on the head.

“Ouch! It hurts!” The snow leopard suddenly feels dizzy and slows down. Though the ball only hit his head once, he laid down and never wanted to play again…