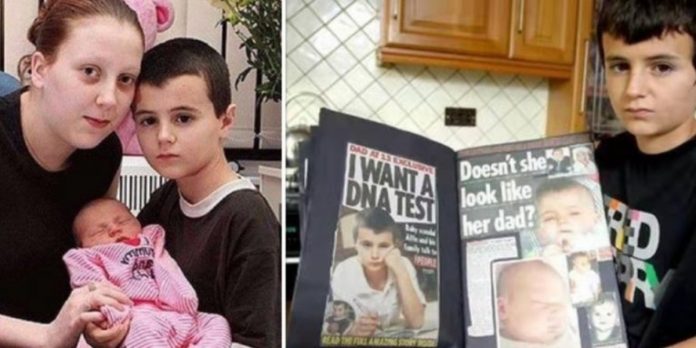 Most 13-year-old children are still in middle school, studying to achieve their life’s goals, enjoying the greatest times with friends, and living a carefree life in and out of school. Though years ago, there was a 13-year-old boy who instantly became a “father”.

In 2009, Alfie Patten, a 13-year-old boy from Britain, became the youngest dad in the world, and it made him instantly famous.

Just like many youngsters his age, Alfie lived a carefree life with his next-door neighbor, 15-year-old Chantelle Stedman. They grew up together and got along fine, although Alfie was the quiet one who mostly kept to himself.

Both their families live in the U.K. Chantelle has 5 siblings and both her parents are homeless. All 8 family members live in only 1 room, living with only relief goods given by the government. On the other hand, Alfie’s father works in a towing company, has 9 children, including Alfie, and his mother is unemployed.

More often than not, children who are raised with a lack of parental discipline are often aggressive with their manners. When Alfie and Chantelle were playing one day, she told him, “I’m carrying your baby, and I want to give birth to him!”

Alfie, who was only 13-years-old then, was clueless about this. Though he and Chantelle decided on the obvious: to hide her pregnancy from both their parents, give birth to the child in secret, then raise the child on their own.

As Chantelle’s belly grew and could no longer be hidden, their parents immediately realized they were going to be grandparents. Initially, they were shocked, since both Alfie and Chantelle are still minors, but both families did not prevent Chantelle from pushing through with her plans to give birth to the child. “What is one more child to add to our families. No big deal!”

When finally the day came, Chantelle has given birth. Being 13-years-old and the youngest father in the whole world, Alfie instantly became famous.

A 13-year-old boy focusing on being a father becomes the means for his parents to make a profit.

Alfie’s story has become the media’s topic, and the families had to endure swarming reporters outside their homes every day, hoping to convince Alfie to do interviews.

This gave an idea to Alfie’s “business-minded” father. Seeing that their homes were surrounded by the media, he discovered a “way to get rich”. He decided to “sell” updated news to the reporters wherein he gets paid a high price.

Initially, Alfie’s mother was ashamed of her husband’s “business” of using Alfie as a means to make a profit, condemning it many times. In the end, she faced the “Law of True Fragrance”, selling news to eager reporters and telling them that Alfie was her son from a former lover. Media statistics report that the couple has earned hundreds of thousands of Sterling pounds doing this type of “business”.

As the twist and turns of his parents’ stories have turned to be more bitter, Alfie’s fame grew, though his life got affected by the negativity of the public’s opinion. People at his school laughed and bullied him, and everywhere he went, strange looks followed him. Finally, he decided to quit school and stayed home to take care of his child. He read books on how to become a better father.

The truth came out! 13-year-old Alfie could not take the news.

When news of Alfie becoming a father spread, 8 more boys came forward claiming that Chantelle was their former girlfriend and that each of them said he was the father of the child.

Alfie could not believe what he was hearing, and his mother always felt that there was something “off”. Finally, Alfie became impatient and had the baby do a DNA test to prove if he was or was not the biological father.

When the results finally came out, everyone was shocked. The baby’s father was actually a 15-year-old boy named Tyler Bake, one of whom Alfie did not even hear of.

It was revealed that Chantelle’s personal life was not discreet. Despite being a teenager, she had numerous relationships with different men, and Tyler Bake and Alfie are only two of many.

Chantelle revealed that she only said that Alfie was the father because she told Alfie that he was her first and that she was untouched.

The revelation broke Alfie. His outlook in life collapsed, he lost his faith, and his life was ruined. He dropped out of school and stayed home, refusing to go out. The boy who was “happy to be a father” is no more.

Chantelle and her family moved out of the neighborhood and were never heard from again.

12 years have passed, and Alfie remained completely listless and gloomy.

Chantelle was gone, Alfie has faded out from the public eyes, and the news of the so-called 13-year-old father subsided. Though 12 years later, news of Alfie resurfaced.

At 25, he was an unemployed wanderer and was often captured on photographs by the door of a courtroom. Media reports that he was sentenced to 2 years of probation due to shoplifting and illegal possession of forged firearms.

Recent photos of Alfie, the former 13-year-old innocent boy who was handsome, transformed into a degenerated man filled with corruption and whose life has completely darkened.

If Alfie’s parents took more responsibility in raising him properly, he would never get to the point where he would lose all hope in life. He would have handled life strong.

Not a lot of children are taught about the “birds and the bees”. Though “puppy love” happens often to youngsters, it is very rare for a young boy like Alfie to experience life’s ups and downs at an early age.

In fact, throughout Alfie’s unusual experience, it was the result of his parents’ negligence to guide him in the right direction:

He was experiencing puppy love; he was not given proper guidance.

When they thought their son had made a mistake, they used it as a “tool for making a profit”

When the problems subsided; the children realize that no one has helped them overcome the obstacle but themselves.

As a parent, give your child light and direction.

When children are growing up, they are like a “deer in a fog”. They still need guidance and attention to reassure them that they will never go astray. It is inevitable for people to make mistakes, no matter what age. Parents are supposed to guide the children when they make mistakes in life, and save them when they are caught in a web of misfortune. They should teach the young minds to go down the right path, show them how to set sail in the right direction, and show them how to stand up again each time they fall.

Parents must establish good and clear views in life for their children. Teach them to avoid making mistakes that they will regret for life, and guide them to the right path so they will never go astray.

It was not Alfie’s fault that Chantelle fooled him into being her baby’s father, but is also not the reason to go astray later in life due to the bad choices he made.

What do you think of what happened to Alfie?