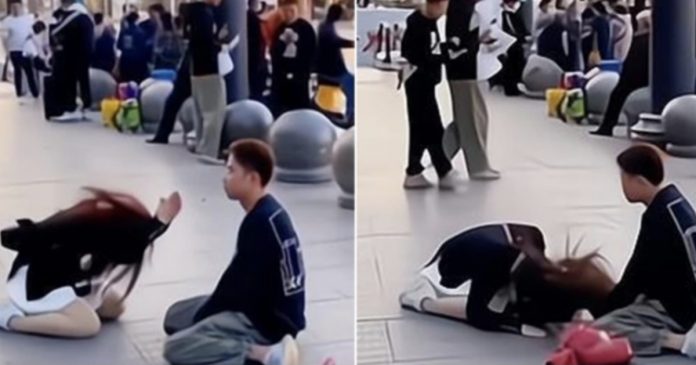 A woman can just take so much from a suitor who has been rejected numerous times but keeps on pursuing her. Recently, an incident involving a woman from Anhui, China, and her persistent suitor was caught on video, and it instantly went viral.

The said video has been circulating on various social media platforms, and it shows a woman literally begging her suitor to stop chasing her. She was down on her knees and very upset, with her suitor also sitting on the floor in front of her.

While pleading, she threw the bouquet at him. The boy, in return, did not seem to have any reaction in the incident. Although no dialogue could be heard throughout the video, the girl’s reactions were clear.

The video shared on ET Today garnered hundreds of viewers. An eyewitness claimed that the boy pursued her for 5 years and kept expressing his love for her, though was rejected multiple times. He never gave up and kept pursuing her for years.

Yahoo Taiwan News reported that the woman got “fed up” and finally confronted the boy, up to the extent that she yelled at him, “Please let me go!”

According to media reports, the short video clip raised various reactions from netizens, although they were unsure of what the outcome of the conversation between the two people involved was.

Some netizens said that the boy should respect the woman’s decision to leave her alone and move on, while others felt pity for the boy and said that she should have given him a chance. Other netizens say, “Just let them be.”

You may watch the video here: (click the link under the photo)

A Single Mother in Colorado Adopts a Baby Girl and Later...

Little boy kept showing up for school late—school’s punishment and the...