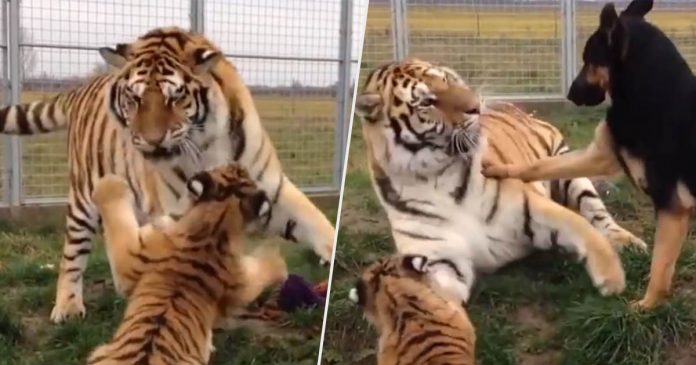 Educating our children can certainly give us stress and headaches. Not only does this happen to humans, but to animals, too. Especially when telling them to behave, but they never listen.

In a zoo, a naughty tiger cub made its mother very angry.

The mischievous little tiger was not listening to its mother, who was scolding and telling him to behave. Though the cub was very small and quite stubborn, he was not afraid of his mother and continued to be playful. The mother tiger seemed to have enough of the cub’s mischief, and it started to look like they were fighting.

A dog nearby noticed the interaction between the mother tiger and her cub. Assuming that they were fighting, the dog ran into the cage towards the duo. Thinking that the cub was being scolded by its mother, the dog intervened in an attempt to stop the fight. The dog laid a paw on the tiger to stop her from hurting the cub.

Upon seeing the dog and its attempt to stop her and her cub, the tiger was stunned. Though the dog seemed to be reprimanding her for hurting her young one, she did not seem to understand why it was happening when she only wanted to educate her cub for being mischievous.

Tiger mother: “Eh! What’s this guy’s problem? Don’t you know that I am Queen of the jungle? Dare to die reprimanding me?”‎

Although the mother tiger roared, the dog was not intimidated or scared of her. Both animals seem to be understanding each other about how to educate their young ones.

Later, the tiger seemed to be tired of trying to scare the dog that did not waver. She finally stopped scolding her cub and let it go, to satisfy the dog’s intervention.

Just let the dog win. No use in reasoning with something that does not scare that easily.

Playful Baby Elephant Smashes His Grandmother’s Cake Made by the Staff...