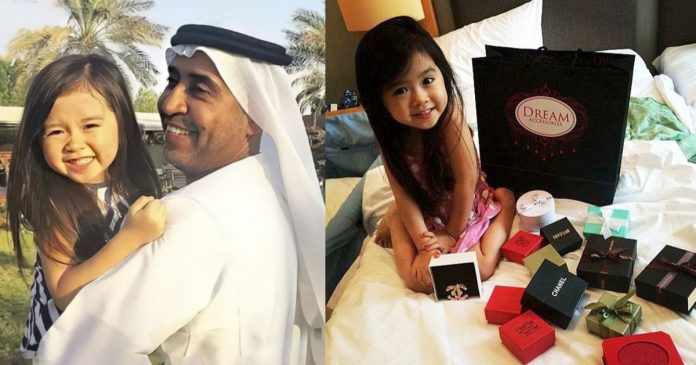 She is a very lucky young girl with doe eyes and a captivating smile! At the age of 5, a man in Dubai has adopted her because of her charming personality. Since then, she has lived a life of luxury and is being treated like a “celebrity.”

She has an older brother with her biological family, who also has the same good looks like she. Breanna’s mother likes sharing her adorable “baby photos” on social media. At a very young age, she loves to do funny and cute faces in front of the camera, gaining her numerous fans on social media platforms.

Breanna caught the eye of an Emirati, who immediately made her popular. He shared her dance videos on social media, making her step into stardom not only back in her hometown but also abroad. Many fans who have seen her videos were enamored by the sweet little girl.

Her popularity does not only depend on her charming personality. Breanna’s parents are in the import/export seafood business back in South Korea. Due to her work, Breanna’s mother speaks four languages namely, English, Korean, Arabic, and Tagalog. The young girl has also learned various basic speaking words in different languages, basically to say “hello.”

It was Breanna’s father who taught her how to sing and dance, and in addition to her many talents, she also shows an ability to learn many languages. Breanna’s followers on Instagram have already reached a million, and most of them are from the Middle East countries. Her popularity has led people to give her various high-end gifts, most expensive items like signature bags, clothing, and even luxury cars, which cost millions!

Since Breanna enjoys life like a celebrity in front of a camera, she was invited to appear in variety shows and modeling stints just like other child stars. Due to her sweet and pleasing personality, she is loved by the rich people in Dubai. A rich man flew from Dubai to South Korea to meet Breanna and her family, and later invited them to visit Dubai with all expenses paid by him.

When the rich man asked permission to adopt Breanna, her parents were skeptical and in doubt of the Emirati’s idea. Given that Breanna was very naïve and lovely, the idea never crossed their minds that anyone would be interested in adopting her for these reasons.

Seeing the doubts of Breanna’s parents, the tycoon gifted them with extravagant items, sparing no expense. He also communicated with them often. In the end, they realized his sincerity, removed all their doubts, and made Breanna recognize him as her godfather.

Once the tycoon has adopted her, Breanna started living her life like a princess. She wakes up in a home as huge as a castle, she wears beautiful dresses that make her look like a princess, eats delicious food with the family every day, and rides a luxury car when they go out.

Breanna received different kinds of presents from rich people every day. Her rich godfather gave her a Rolls Royce on her birthday. She has a servant who tends to her, and she enjoys the attention she gets from her fans.

Rumor has it that the rich tycoon has suffered from depression in the past, and was healed when he chanced upon Breanna’s videos on social media. Her smiles captivated him, and this is one way for him to repay her and her family. While showering the young girl with lavish gifts, he also pays attention to her education and assures Breanna of a bright future when learning.

Her parents encouraged Breanna to learn more languages which would be a necessity due to her lifestyle. During her stay in Dubai, she did not indulge herself to being idle. She goes with her godfather to various social occasions, learns various cultural etiquettes, and transforms herself into a more generous young woman.

Breanna and her family lived in Dubai for 10 months. During this time her parents were not able to look after their business. They returned to South Korea, then came to the Philippines, where she has finally settled in. In the Philippines, Breanna is still very much active on social media, and her language skills have improved so much. She has mastered 4 languages in which she teaches her followers to speak the basics through her online platforms.

Breanna has learned advanced steps in dance and has done well on online dance challenges. At a very young age, lucky Breanna has enjoyed so much in life that some people will not be able to achieve in a lifetime.

The probability of a fairy tale life that Breanna has experienced is slim to none at all. An ugly duckling does not grow immediately into a swan. People should not mistake beauty as a personality and should strive to build and improve their strength. This is the capital of one’s character.

Finally, in the future, whether you encounter good luck, prosperity, or difficulties and setbacks, take a deep breath and face them calmly. Life is like a wheel. Either you enjoy the fruits of good fortune or endure the worst results and transform them into good luck. Expect the worst and hope for the best.

It was Priceless! Heartwarming Moment When a Bride Delivers Her Vows...