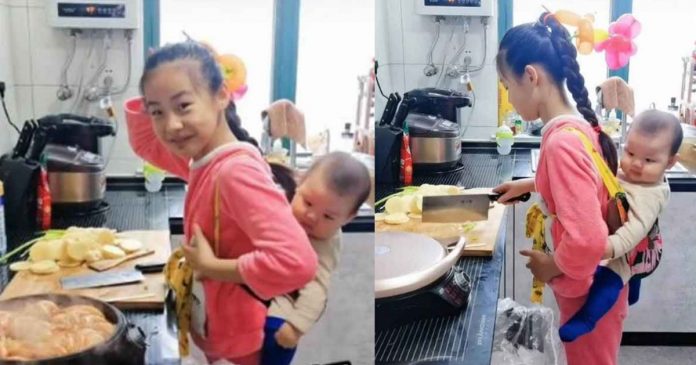 A daughter of a single mother recently displayed proper behavior and responsibility to help. The mother of two shared the experience, saying that she felt a little guilty but was touched by what her daughter did.

Her eldest daughter, 9-year-old Dabao, carefully tended to her younger brother, Erbao, who was a year old. One weekend, after doing all her school work, Dabao took good care of Erbao while allowing her mother to rest. The cute baby brother was well-behaved, doesn’t cry or make trouble, and trusted his older sister in return.

One night, the mother saw her daughter wearing a baby carrier with her little brother at her back as she walked into the kitchen. She was surprised by what her daughter was working on.

Dabao was preparing dinner for the family while carrying her younger brother at her back. She was also quite worried that her brother may be bored, so she tied some balloon figures on her hair for his entertainment.

Seeing this impressive behavior from her daughter, the mother felt a small pang of guilt but was very proud of Dabao. She rushed in to help, though Dabao declined.

Her daughter advised her to rest, and she accepted, though with a little hesitation. Seeing her daughter show some responsibility at a young age touched her heart and made her proud of raising her correctly.

Praises from netizens about her daughter warmed her heart:

“What did your daughter did to repay her gratitude is priceless.”

“I’m envious because I do not have a daughter. I’m really touched.”