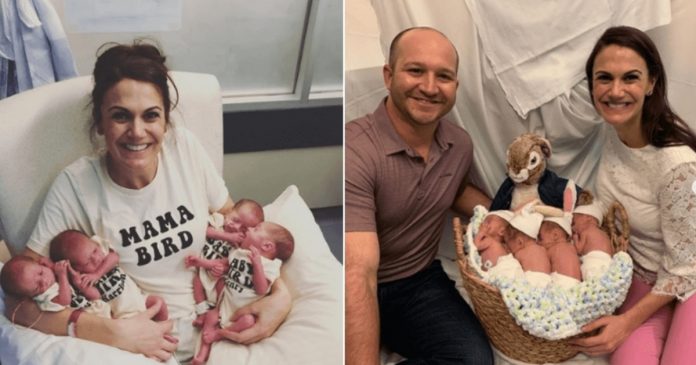 A mother has given birth to 4 identical quadruplets during the pandemic. The couple welcomed their newborn babies and shared what life was like having 4 baby boys on their social media.

In March 2020, first-time mom Jenny Marr from Texas, USA, was in for a surprise of her life. The 36-year-old mom gave birth to identical quadruplets, a rare incident that only had 72 cases in the whole world. The probability of having quadruplets is around 1 in 11 million or 1 in 15 million. Lucky new parents, Jenny and her husband, Chris, welcomed 4 new members in their family.

When Jenny visited her OB-Gyn in November of 2019, she had an ultrasound examination wherein the doctors told her she was having triplets. When she came back for another check-up 2 weeks later, the doctor confirmed she was having 4 babies.

Jenny joked, “So I won’t dare come to another maternity check-up after 2 weeks, maybe next time they’ll become 5 babies!”

▼After the birth of the 4 babies, they had to be tube-fed due to their small sizes. They had to stay in the hospital for monitoring for 10 weeks and were finally allowed to be brought home by mid-May. Luckily, all 4 boys were healthy. Jenny posted updates of the babies’ situation on Instagram, which garnered 83.6k followers as of late.

Presumably, raising even just 1 baby is tiring. Raising 4 babies at the same time is very difficult and time-consuming. The couple revealed that they spend $300 a week on groceries, change the 4 babies’ diapers 6 times a day, and buy almost 1.5 gallons of milk “every couple of days”.

Jenny admits she gets confused and could not tell them apart, and the couple’s days are filled with feeding, diaper changing, and putting the boys to sleep. Though the couple promised to raise the boys the best way they can.

▼Now that the quadruplets are more than a year old, their handsome looks are getting more refined. Their infectious laughter is enough to brighten up everyone’s day. Simply looking at them will heal all stress and worries.

Raising 4 babies at a time may be difficult, but instantly having 4 new members makes the family happier. There is a truth to the saying, “The more, the merrier!”

Husband stumbled upon his wife’s preschool photo and burst into laughter...