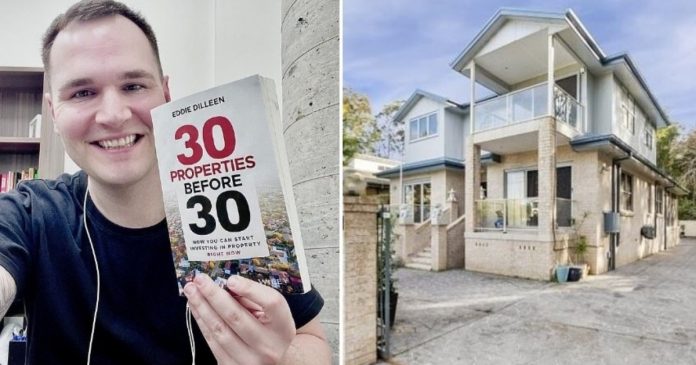 Eddie Dilleen was working at McDonald’s and with annual wage of less than $26,000 when he bought his first property, a two-bedroom unit, at 18-years-old. Since the pandemic, he was able to purchase 20 properties in 18 months.

30-year-old Eddie Dilleen from Willmot, Mt. Druitt in western Sydney is a property tycoon who has just purchased his 40th home on his 30th birthday, boosting his portfolio to $20 million! With an annual rental income of more than $600,000, that’s over $10,000 gross per week.

“It’s a larger property something I wouldn’t usually buy,” Eddie told Daily Mail Australia. “It’s basically three units in one, so I’m going to rent the two other spaces out and keep the other as a holiday house. I’ve always wanted a holiday house near the beach.”

Recently, he has purchased a home worth $875,000 in Sydney for his mother.

“It was just for her to live in because I wanted to get her out of the housing commission we used to live in,” he said.

Since the pandemic in early 2020, government announced to lockdown and many oversea students have to leave Australia, end up the owner have to sell off the property. The real estate prices have been steeply dropping that the property mogul took the opportunity to purchase 20 properties in 18 months expanding his investment collection to 40 properties in total.

“I bought six properties in five months roughly, those ones were all in Queensland… there were no buyers in the Brisbane market, everyone was extremely scared,” he said. “Some of the properties I bought last year in May for $300,000 are now worth around $550,000, it’s almost doubled.”

Currently, Eddie is planning to buy properties in Brisbane, Adelaide, and Sydney.

As the pandemic still affects the property market, Eddie assures himself that he is not concerned that it would have an impact on his portfolio since his investments are based on a strategic formula that ensures his expenses are much lower than his income.

According to Eddie, “good cash flow or high yields, capital growth, and buying at a discount price below market value” are the three main features you must consider when investing. His passion for purchasing properties began when he was a teenager, and this self-made millionaire secured his future.

“I grew up in western Sydney and came from a family where no one actually owned property at all,” he previously told Daily Mail Australia. “From very humble beginnings, a pretty rough neighborhood, that was my driving factor. I didn’t want to have to struggle and grow up how I did.”

When Eddie bought a two-bedroom apartment for $130,000 in the Central Coast, north of Sydney, while living in Mt. Druitt, he had it rented for $220 a week. The return of investment increased roughly by 7%.

Along with investment properties in Adelaide, Brisbane, and the Gold Coast, Mr. Dilleen has written his first book, 30 Properties Before 30, which is inclusive of his tips and tricks on proper investing.

Focusing on property rental returns and purchasing properties below the market value are best, narrowing your choices down to those who want to sell properties immediately.

Reading and focusing on property investment books and taking notes on researches may help you create a strategic plan when buying properties. In his book mentioned a good property investment will generate a snowball effect and this will build up your portfolio in profitable way.

“I worked out a formula and strategy, it came down to a lot of research and I read a lot of different property investment books even though I hated reading it at the time, I forced myself to learn a lot,” he said. “I built up to it, I started off small, with the small properties, and gradually the equity increased. It’s better to be in the market than on the sidelines waiting or to say it’s too hard and not try at all, that’s not the best attitude to have in life.”