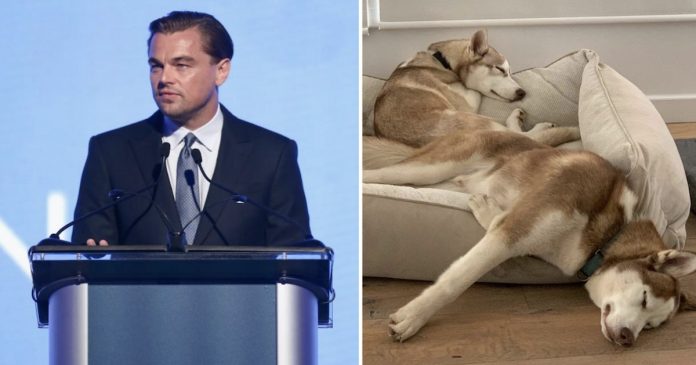 Hollywood celebrity, Leonardo DiCaprio, stars in the new movie, Don’t Look Up, together with Jennifer Lawrence. The film started streaming on NetFlix on December 24, 2021. He recalled that while filming his scene, his two Siberian Huskies fell into the icy lake, and he had to jump in to save the dogs.

▼In 2019, 47-year-old Leonardo and his girlfriend of 4 years, Camila Morrone, adopted two Siberian Huskies and named them Jack and Jill. Later, they adopted a third dog, which they named, Sally. The 3 dogs were raised in California and have never seen an ice lake. One day, when Leonardo was on the set of “Don’t Look Up” filming his scenes, one of the dogs fell into the icy lake.

Jennifer Lawrence, 31, recalled her version of the rescue story: “One of the dogs fell in, and Leonardo jumped into the frozen lake to save the dog. As soon as he pushed the one dog out of the pond, the other one jumped in.”

“Well, the other one started licking the one that was drowning, and then we all were in the frozen lake together,” he said, describing the incident as a shocking experience to the dogs since they are used to the warmer waters in California.

Although Leonardo was calm by the time he said the story, he admits to having been very nervous at the time of the rescue. Being immersed in icy waters can bring hypothermia and may even lead to death. Despite the cold and the feeling of fear, Leonardo did not hesitate to jump into icy waters to save the dogs, which shows that he is a good and responsible master.