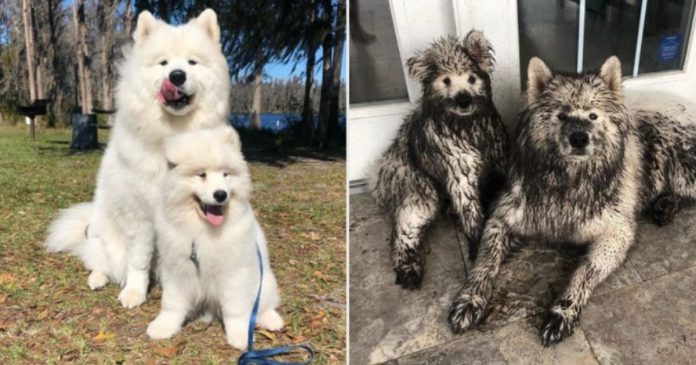 Samoyed dogs are one of the friendliest breeds. They never fail to put a smile on their owner’s face even when they are a bit naughty. They can become healers of grieving people, and their heavy hearts eventually feel at ease when this breed of dog consoles them.

Two Samoyed dogs in the USA went to play in the yard when they heard the sprinklers automatically turn on, and the door was unlocked. They played in the mud, rolling on the soil, and came home very dirty and looking innocent. You would never recognize these two fluffy white pets who turned up covered in mud.

Lora Larkin of Tampa, Florida, is the owner of these two playful Samoyed dogs, brothers Felix and Finley.

Lora was taking a shower one day and forgot to close the door, and these two brothers went out to play in the yard when they heard the sound of the sprinklers. Playing in the showers and rolling in the mud, these two hilarious doggos seem to have no cares in the world as they were enjoying the wet soils on their white fur.

As soon as the owner was done taking a bath and came out, she was surprised to see the two muddy dogs who now needed to bathe. With this much mud on their fur, will they get as clean as they were before?

The hilarious photos were shared on Instagram, and a video was posted on TikTok. Here are some comments from Felix and Finley’s followers:

“Life needs to be slow. They are very happy..”

Playing in the backyard and getting dirty with mud and water is the happiness of our pets. Nature enjoyment for animals makes their life colorful, just like our children who love to play outdoors.

Felix and Finley may be sloppy and funny, though they know how to enjoy life to the fullest. Anyone who is not amused by these two dogs should see for themselves and follow them on their social media pages.