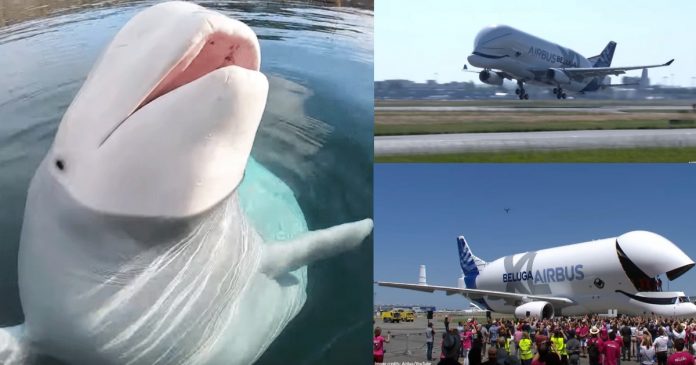 The white beluga whale has a unique appearance, witty personality, and emits a cute sound. It has been called the “Sea Canary” due to its white color. Generally, the beluga whale swims in the deep blue sea. Now, not only do they swim in the ocean but fly in the sky, too. Imagine!

The European airline Airbus launched the “Airbus Beluga XL” in 2018, which instantly became famous for its distinct beluga shape. It was named “the cutest airplane in history” by foreign media!

Initially, airline employees voted from several animals to choose from, and the Beluga whale accounted for 40% of the votes. An Airbus A330 plane was then transformed into a Beluga whale, complete with its eyes and mouth.

The pure white fuselage is painted with cute big eyes and blue lines on both sides. It is as high as a three-story building and weighs 125 metric tons. It can carry 51 metric tons of cargo. Its size and shape are now similar to a whale. Its body shape is also nicknamed “the whale in the sky.”

Beluga airlines took off for the first time in France in July 1, 2018. It attracted a large number of people to visit the airport when it set off for the first time. Everyone at the scene captured photos and videos on their mobile phones and tablets to record the historic appearance of this “loveliest airplane in history”!

After the initial take-off, the Beluga must pass a 10-month flight test before it will be officially used. At present, the Beluga is not open to cater to passengers and is only responsible for transporting supplies across Europe. As a cargo plane, the Beluga whale plane’s mouth can be opened, which is convenient for loading and unloading goods!

Airbus is also expected to build 5 more identical freighters by 2023. “Kids love this plane so much, and I think it can be a representative aircraft of our company,” said Bertrand George, head of planning for Airbus.

Although there are no plans yet to develop the Beluga Airbus into a passenger plane, netizens believe it will be possible to open it to the public in the future. I certainly hope other countries will also have the opportunity to see whales flying in the sky!