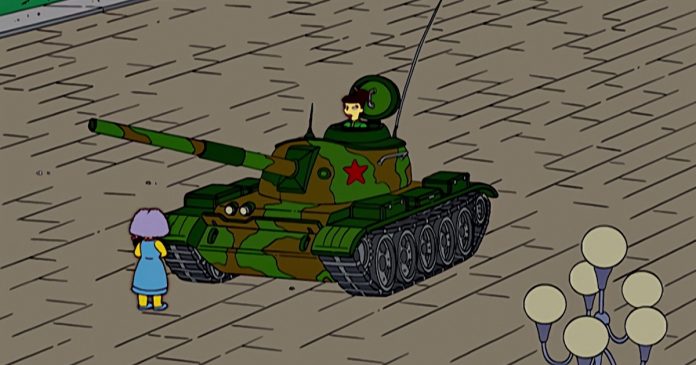 Disney+ is new in Hong Kong, and it has just started streaming shows early this month. Viewers of the animated series, The Simpsons, have noticed that episode 12 of its 16th season is missing from the app. The title of the said episode is Goo Goo Gai Pan, and it premiered in 2005, featuring the Simpson family visiting China wherein the sister of Marge is about to adopt a baby.

Episode 12 of season 16 in which the Simpson family travels to China and visits the historical Tiananmen Square has been omitted from the Disney+ online streaming service in Hong Kong. Citizens have raised concerns about mainland China-style censorship in Hong Kong.

The events of June 3 and 4, 1989 saw potentially hundreds or even thousands of innocent lives lost after the China Communist Party(CCP) ordered its troops to open fire on pro-democracy activists included students at Tiananmen Square in Beijing.

Though Disney+ has not yet been released in some countries, the streaming service has done massive upgrades since it has launched 18 months ago. In such a short time, the service has reached more than 116 million subscribers in countries it has catered.

Disney+ Hong Kong started streaming early this month, and immediately, netizens who are fans of the animated series, The Simpsons, have noticed that episode 12 of season 16 has been missing from the list.

The episode, which was released in 2005, featured the Simpson family’s trip to China wherein Marge’s sister, Selma, planned to adopt a baby. The scene where the family visits Beijing’s Tiananmen Square is the exact site where the massacre in 1989 has taken place, a deadly crackdown against democracy protesters.

A scene in the episode showed a huge sign that reads, “TIEN AN MEN: ON THIS SITE, IN 1989, NOTHING HAPPENED”, a sarcastic way of presenting China’s campaign to eliminate memories of the incident. It also shows a scene where Selma stands before a tank, in reference to the infamous photo of a lone man standing before a tank to prevent it from passing.

The episode also showed references to Tibet, where they accused Beijing of the Cultural Revolution during the last decade of Mao Zedong’s rule, and how the country has undergone religious oppression.

However, it is unclear why Disney+ omitted the episode. May it be ordered by the authorities, or the streaming service app had it removed, or if it was included in the list of episodes by default. We can be assured, though, that Disney+ does not skip any episodes in all their shows. An episode may be deleted, but the list would still be consecutive.

The streaming service personnel has not responded to any requests for comments about the matter, nor has the government of Hong Kong. Upon checking the episode list on Monday by the AFP, The Simpsons season 16 has episode numbers 11 and 13, but episode 12 is missing.

Lately, Hong Kong has been known for its artistic and political freedoms compared to that of mainland China. However, the Hong Kong government is eyeing to transform the city with a much more strict implementation of laws since the huge and often violent democracy protests two years ago.

New laws on censorship were introduced last summer, and one of the laws to be implemented is to forbid releasing shows that may breach a broad national security law that China has enforced in 2020. These censorship laws alerted directors and producers to delete scenes, and they have the right to refuse inappropriate films to be shown in public.

Currently, the new national security law does not cover online streaming services, though the government has warned that online platforms may fall under other rules. Recently, Hong Kong’s Beijing-appointed leader Carrie Lam has introduced and implemented the “fake news” regulations, proactively exposing loopholes in the HK’s internet.

China’s “Great Firewall”, the city’s internet and news censorship regime, may be extended to Hong Kong.

The episode shows a character that ends up in a Chinese labor camp, and most of the scenes openly show American brands willing to comply with Chinese censorship laws for financial gain.

The skipped episode sees the Simpson family visit Beijing and the embalmed body of former leader of Mao Zedong, whom Homer Simpson calls “a little angel that killed 50 million people.”

Watch the 2 minutes full video clip of the missing episode 12 on the website.

The missing out the episode titled “Goo Goo Gai Pan,” which features a joke placard inside Tiananmen Square stating “on this site, in 1989, nothing happened.”

As of writing, Disney has yet provide an official reason for the episode’s is taking away.