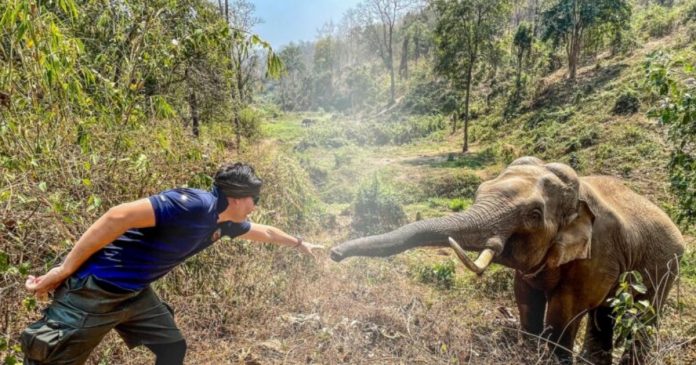 In a heartwarming moment captured on camera, a 31-year-old elephant named Plai Thang reached out his trunk to touch the hand of a veterinarian who had treated him 12 years earlier.

In March 2021, Dr. Pattarapol Maneeon was taking a nature walk in Thailand when he heard the cry of an elephant.

When the astonished doctor waved, the elephant approached and reached out with its trunk to greet him. The unexpected reunion is believed to be the first time in more than a decade that the elephant has come into contact with a human. Dr. Maneeon is sure the elephant recognized him.

They first met in 2009, when Plai Thang was found “on the verge of death” in the woods of Rayong, eastern Thailand. The elephant suffered from severe trypanosomiasis, or sleeping sickness, which is a parasitic condition.

At that time, the elephant suffered from a multitude of health problems. He suffered from fever, anemia, inflammation of the eyes, swelling of his head, stomach, and neck, and stiffness in his legs and back.

“Plai Thang was very aggressive when we first met. His body was weak and he couldn’t fight other elephants. It took a long time for him to heal, but we found out that he was very smart and taking care of himself,” said the vet.

Plai Thang was then transported to Forest Industry Organization territory in Lampang province to be treated by staff from the Department of National Parks, Flora and Fauna. After receiving treatment for several months, Plai Thang was released back into the wild.

Twelve years later, Dr. Maneeon is grateful that he was lucky enough to reunite with the elephant. He says it’s times like this that are the most rewarding in his job.

“It was a very special moment,” he said. “I hope this makes everyone appreciate the work people do with elephants.”

Elephants are the official animal of Thailand and there are an estimated 3,000-4,000 of the animals living in the country. Of this figure, at least half are domesticated, while the remainder lives in nature reserves.

These two koalas are fighting and the noise they make is...